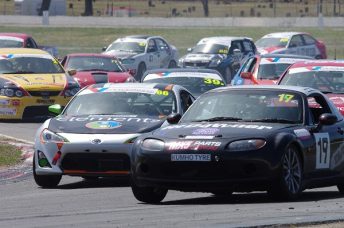 One of regional NSW’s largest and most trusted commercial building, facility management and warehouse operations providers, Joss Group will be the naming rights sponsor for the iconic Winton 300 endurance race to be held on 11-12 November 2017.

Joss Group, a private company based in Albury, was founded by the husband-and-wife team of Colin and Lorraine Joss in 1975 and has since expanded across the state with offices in Deniliquin, Griffith, Wagga Wagga, Fyshwick, Wollongong, Batemans Bay, Bathurst, Dubbo and Broken Hill.

The Winton 300 has a distinguished history as one of the most prestigious events on the nation’s action track’s annual calendar.

The original incarnation of the 300, run in the 1980s and early 90s, was a round of the Australian Production Car Championship and attracted many high-profile drivers including Peter Brock, Allan Grice, Brad Jones and Neil Crompton.

After an absence of almost two decades, the Winton 300 was resurrected in 2011 under the auspices of the AASA – since then, it has exploded in popularity, becoming a “must-do” event for competitors from Victoria and interstate, and frequently attracting more than 40 entries.

The Winton 300 is open to a wide variety of production-based vehicles, and its appeal lies in the accessible and affordable environment it has provided state and club-level motorsport competitors to enjoy the strategic and teamwork aspects of endurance racing.
Winton Raceway operations manager Wayne Williams is pleased the event’s popularity has been recognised by a successful local business.

“The Joss Group shares many philosophies with the Winton 300, including catering for a specific market niche and working hard to build a customer/competitor base,” Mr Williams said.

“We’re thrilled Joss Group has noticed the potential of the event and has decided to provide support for it.”

The big winners of the Joss Group sponsorship deal will be competitors and spectators, who will benefit from extensive coverage of the Winton 300 including live streaming.