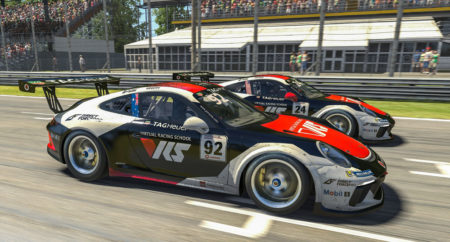 Joshua Rogers has taken home the championship title of the Porsche TAG Heuer Esport Supercup for the second time. Driving for the Virtual Racing School team, the Australian scored first place in the feature race at the finale on the virtual version of the Autodromo Nazionale Monza in Italy. Thanks to his tenth win of the season, the 21-year-old again convincingly claimed his second title after 2019 in the global championship run on the iRacing simulation platform. “Josh” Rogers’ teammate Mitchell deJong from the USA secured vice-champion honours. Britain’s Charlie Collins finished the sprint race in second place behind Dayne Warren (DirectForce Pro) and thus rounded off a dream result for the Virtual Racing School squad. The Australian Emily Jones (@Emree) pocketed the title of the All-Stars, a line-up of high-ranking esports influencers.

Sprint race: Warren celebrates first race win of the year
In the close qualifying session for the seven-lap sprint race, Collins narrowly beat Australia’s Dayne Warren by just 0.036 seconds. For six laps, the British sim racer held the lead, before Warren catapulted out of his slipstream, edged ahead of him into the first chicane and narrowly clung to lead to the flag. Chasing him across the line was Collins, Mitchell deJong and Joshua Rogers. The critical eighth place and thus pole position for the final round went to the Frenchman Yohann Harth from the Apex Racing team. In the Porsche TAG Heuer Esport Supercup, the eight best finishers from the sprint race tackle the feature race in reverse order.

Main race: Show from Rogers and deJong, drama for last year’s champion
The main race over 14 laps was marked by many changes in the lead, a surprising visitor to the podium and bad luck for last year’s champion Sebastian Job (Red Bull Racing Esports). The British online racer experienced a day of misfortune at the final event of the year. Due to a penalty from the previous race at Le Mans, Job was not eligible to take part in the qualifying and consequently had to start from the third to last grid spot. In the sprint, the 2020 champion was shunted into a spin; in the feature race, his virtual Porsche 911 GT3 Cup landed on its roof after an accident involving four vehicles. As a result, Job was thrown out of contention for the vice-championship crown.

For the Briton, however, a bid for second place would have been difficult anyway, as his rivals from the Virtual Racing School team were too strong. Joshua Rogers and Mitchell deJong allowed the Frenchman Harth and then the Dutchman Mack Bakkum (LEGO Technic Esports Team) to lead the field just before the halfway mark. However, from lap seven, they made it very clear who the real pacesetters were at Monza. Lap after lap, the two top drivers of the season used each other’s slipstream to take turns at the front of the field. Ultimately, Rogers netted his tenth win, and deJong’s second place was enough to earn him runner-up laurels.

Behind the unbeatable leading pair, a turbulent fight unfolded shortly before the end of the final race. In the fierce duels on the long straights of Italy’s Formula 1 track, polesitter Harth eventually relinquished his third place to Bakkum and then had to let Dayne Warren pass. However, the Frenchman did not give up and used a chaotic situation while braking for the Variante Goodyear to move up into third place shortly before the flag. For Harth, this proved to be a stroke of luck. Thanks to his podium result at the finale, the 22-year-old made it into the top 20 of the championship.

Joshua Rogers will not only receive his trophy at the traditional Night of Champions at the end of the year. The 21-year-old Australian will also take home US$50,000 and a high-quality watch for winning the TAG Heuer Pole Award. A total of US$200,000 in prize money was awarded during the 2021 season.

2022 season: 20 starters confirmed, more spots allocated in qualifying heats
After the gripping finale of the 2021 Porsche TAG Heuer Esport Supercup, the popular online racing series will take a short break. In July, qualifying heats for next season begin. From these, the remaining grid spots will be allocated for the 2022 season held on virtual racetracks. The 20 best-placed drivers from this year are automatically eligible to compete next season.

Comments after the feature race
Joshua Rogers (AUS/Virtual Racing School): “I’m incredibly relieved that I can now officially call myself champion again. The season was exhausting, exciting and a real rollercoaster ride. At the first events, my qualifying results weren’t exactly what I’d expected. We worked on this as a team and made huge progress. The better grid positions then helped me to achieve the many successes over the rest of the year. It was great fun, especially after experiencing a really bad season in 2020. I think Mitchell and I put on another great show for the fans at the final race.”

Mitchell de Jong (USA/Virtual Racing School): “That was a top event to wrap up the year. For me, it was all about the vice-championship. Unfortunately, I couldn’t really fight for second overall against Sebastian Job on the track because his penalty meant that he had to start from the back of the grid. It’s a pity, but we still treated spectators to a great show. I’d like to thank my teammates for their support – and Porsche for another awesome season!”

Yohann Harth (F/Apex Racing Team): “I knew that it would be very tight for me in the battle for a top 20 spot in the overall standings. I was under pressure – but it seems I coped pretty well with it. Third place at the end of the season is a dream. Finally, everything came together perfectly. Just in time because now, as one of the top 20 drivers of the year, I automatically qualify for the coming season. It doesn’t get much better than that.”