The countdown is on: The final round of the Porsche TAG Heuer Esports Supercup (PESC) season takes off this Saturday on the digital version of the Grand Prix circuit at Monza. For Joshua Rogers, the tenth and final round of the season could turn into a victory march. 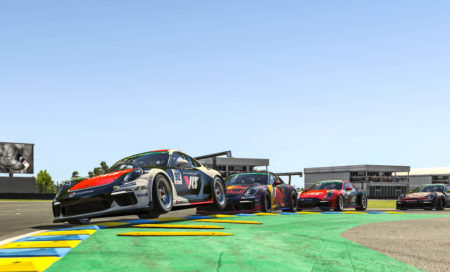 Driving for the Virtual Racing School team, the Australian has excellent chances to take home the official championship crown in his virtual Porsche 911 GT3 Cup after the sprint and feature race. For the 21-year-old, this would be his second title in the global Esports championship run on the iRacing simulation platform after 2019.

The fight for a guaranteed spot in the 2022 PESC adds even more suspense to the final round at Monza. A top-20 result in the overall classification automatically entitles participants a place on the grid next season. The remaining starting positions will be allocated in qualifying races.

At Monza, the PESC sim racers pit themselves against each other in a sprint race over seven laps starting at 9:17 pm (CEST) on Saturday, followed by the main event over twice the distance from 9:45 pm. Fans can watch the iRacing action live on Porsche’s channels YouTube  and Twitch.

Beforehand, content creators from the world of Esports will again showcase their skills in a curtain-raiser. They fight for victory with the virtual Porsche 911 GT3 Cup cars. The live stream begins at 7:35 pm with the All-Star qualifying session. The two influencer races get the green light at 7:45 pm and 8:12 pm respectively.