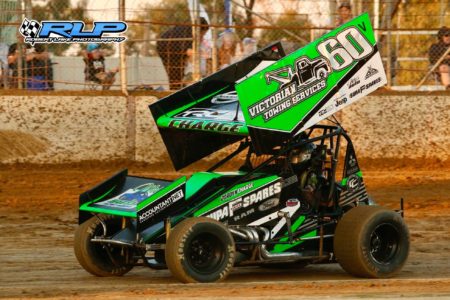 It most certainly wasn’t easy, but Jordyn Charge’s second-place finish in last Sunday’s third and final round at Simpson Speedway was enough for him to clinch the victory in the Triple Crown Series for 360 Sprintcars.

After dominating the opening two Triple Crown Series rounds, Charge was hoping to make it a clean sweep in the final round for what was his first appearance to the Simpson Speedway track since his sensational second-place finish there in last season’s Australian 360 Sprintcar Championship.

Charge started the night in the best possible fashion by topping the time sheets in qualifying, but things soon took a turn for the worst, when he crashed on fourth lap of his heat race while leading, which saw him fail to finish due to sustaining considerable front-end damage.

Following this heavy crash, Charge’s crew back in the pit area set about fixing the damage, as a shaken up Charge was looked over by ambulance personnel on the infield, and they were able to fix the damage and Charge took his place in his second and final heat race where he charged from the back of the field to finish in an impressive second.

By virtue of the fastest qualifying time and a second place in his second and final round of heat races, Charge was fourth highest qualifier heading into the Top 8 pole shootout. In the pole shootout, he found the going a little tough and ended up sixth.

For the feature race, Charge started out of position six and from the drop of the green flag, he quickly moved into third. From there, he chased after second-placed Domain Ramsay and by lap 20 had closed in on him as they encountered lapped traffic. Shortly after, Charge nearly crashed out after Ramsay rapidly slowed with an engine issue and he collided with the back of Ramsay’s car, but thankfully he managed to narrowly avoid crashing.

In the closing stages of the 25-lap event, Charge was safely into second and went about attempting to run down leader and current Australian Champion Brett Milburn, but despite his best efforts, he greeted the chequered flag in second.

As a result of his second-place finish, the Vic # 60 Victorian Towing Services / SupaF Spares supported Maxim driver sealed the overall point standings win in the Triple Crown Series for the 2020-21 season.

“I would have loved to have taken out a clean sweep of the Triple Crown Series, but it wasn’t to be and second was good enough for me to take out the series point standings win, so I’m really happy about that,” expressed the 21-year-old racer.

“It was certainly a challenging run at Simpson Speedway after the crash in my opening heat race and then an action-packed feature race, especially in the lapped traffic, and how I finished it (the feature race) was a great way to thank my team for all of their efforts throughout the night and they were the key in helping me wrap up the Triple Crown Series.”

Charge’s Triple Crown Series win now concludes his 2020-21 season campaign, and the focus now is preparing for the 2021-22 season.

“To win the Triple Crown Series was a fantastic way to conclude the season, and hopefully we can build on this strong finish to the season heading into our 2021-22 season,” the Melton, Victoria based resident enthused.

Charge and his team would like to thank their 2020-21 season sponsors: