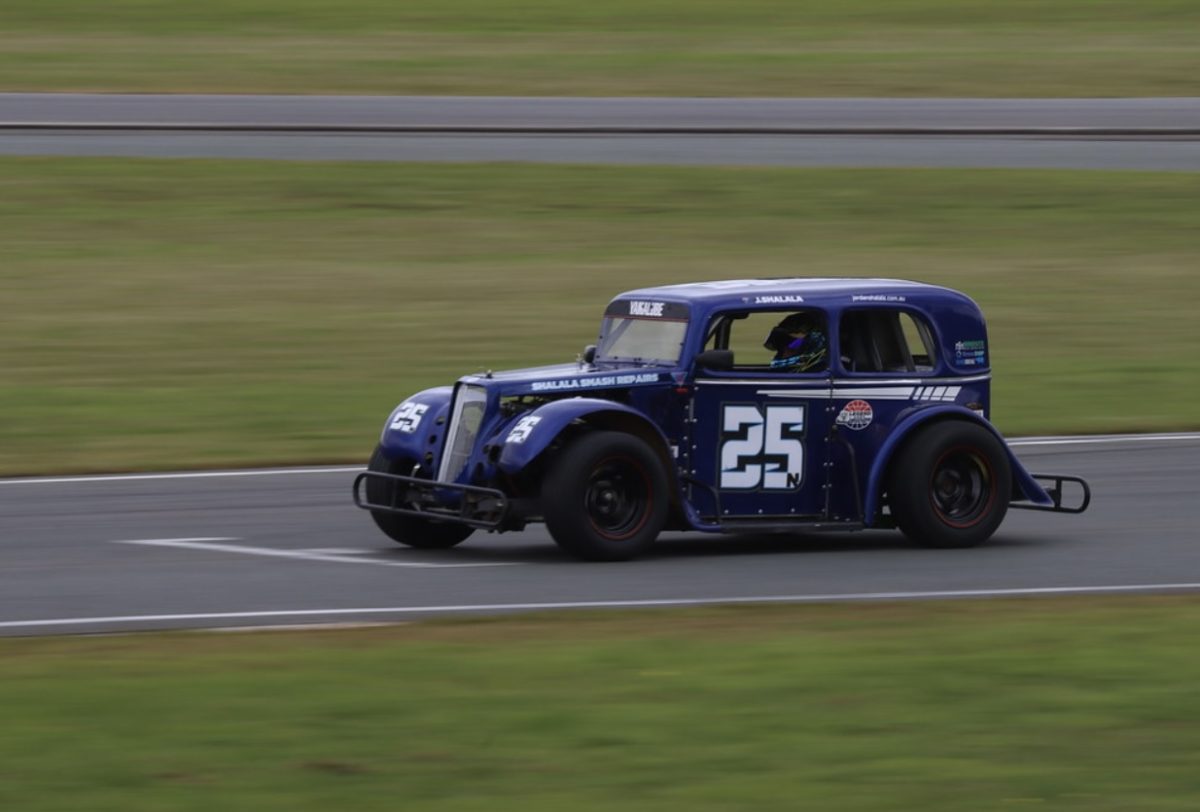 A late announcement came Wednesday evening that state karting champion, Jordan Shalala would be making a move into race cars, starting his journey in the Legend’s Car Australia championship.

Jordan wasted no time after the announcement, testing Friday in very wet conditions at Wakefield park, and qualifying in 5th place on Saturday morning. After getting to the lead in his first ever race, Jordan began to have engine issues, and managed to limp home in 2nd, for a great debut.

After the completion of the first race, head mechanic Paul noted that a broken valve was resulting in the #25 car running on only 3 cylinders. Despite their best efforts the team weren’t able to get the problem fixed, leaving Shalala to compete for the rest of the weekend down a cylinder.

“Absolutely it was frustrating to have the engine issue, but this weekend’s goal was always meant to be a learning experience for us. After race 1 we thought maybe we would have that fairytale debut into cars, but unfortunately it wasn’t meant to be” Said Shalala

He continued “Regardless of the issues though, the weekend was a huge success for the team. Despite the issues, we were still able to remain somewhat competitive and learn a lot about the car in challenging conditions. For me personally, it was a huge learning curve jumping into a car, but also just how a car race meeting runs compared to karts is a big difference also.”

“This kid is fast. At his first ever meeting and in the wet Jordan surprised everyone coming home in second place in race 1. He had an issue with his motor that could not be sorted for the weekend, however he ran the whole weekend down on power and was still up the front. Look out when he gets that engine sorted.” Said Legend Cars Australia

Jordan will now look to rebuild the engine and do spend some more time testing in the lead up to the next round in QLD , June 24-26

“We will be getting the car sorted first thing Monday morning. I had such a great time, and am hoping to be up the front at the next round in QLD. All I can do to make sure I’m at the front is work on myself, so I’ll be training hard, plenty of time on the sim, and test days as often as possible to get the results for all of my team and the time they have put into my racing” Said Shalala