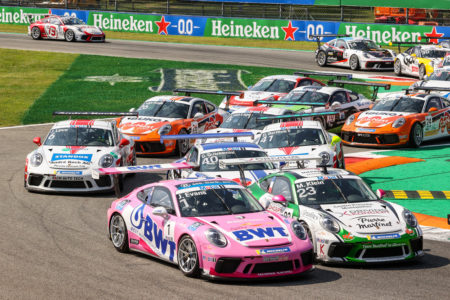 Larry ten Voorde (Team GP Elite) dominated the final round of the Porsche Mobil 1 Supercup in Monza (Italy). Taking up the race from pole position, the 23-year-old Dutchman scored a commanding lights-to-flag victory and secured the title in the international one-make cup series with the Porsche 911 GT3 Cup.

Evans’ efforts helped secure the team classification for BWT Lechner Racing, “I was really happy with the performance, the car was great and we really showed we were more than fast enough in the race. Congratulations to Leon for a great race and to Larry on the championship.”

“I’m very happy to have been able to contribute to secure the Team Championship again for BWT Lechner Racing and I want to say thank you for a great season spent with Walter and his team” Evans concluded.

Love’s seventh position was the best result of his debut season in the Porsche Mobil 1 Supercup season. The young West Australian was rewarded with valuable points and a place on the rookie classification podium.

“Wow, I am so happy with this result,” said Jordan Love. “Our pace was good, and I knew from the start of the race that we had a good chance. The two safety car periods in the early stages meant that I couldn’t attack as I wanted to, so I had to push in the second half of the race.”

Fach Auto Tech Team Principal, Alex Fach, was full of praise for his driver following his progression from tenth to seventh during the race: “Jordan didn’t put a foot wrong today and was really clever in the way he drove. The results this season have not always reflected his performance, but he has been on a very steep learning curve.”