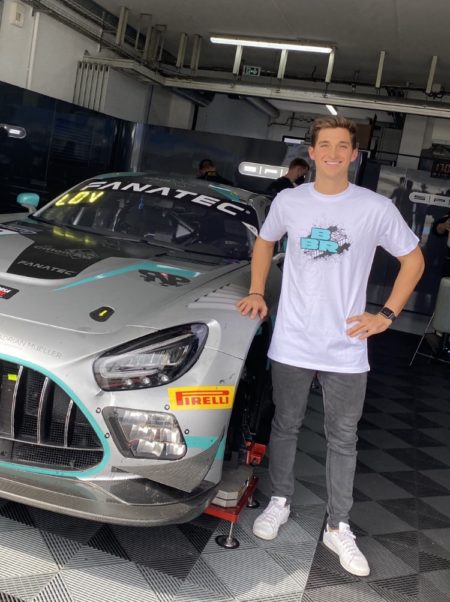 It was less than two years ago he was crowned Porsche Carrera Cup Australia Champion and now West Aussie Jordan Love is making a name for himself in Europe.

Love, now 22, is this weekend competing in his second Round of the 2021 GT World Challenge Europe at Circuit Paul Ricard in the south of France with SPS Automotive Performance as well as representing our new Ben Blackburn Racing branding and merchandise.

“The whole team at SPS have been extremely welcoming and I am super happy with how professional there approach is to every race weekend,” Jordan said.

“Thanks to Ben Blackburn Racing for the ongoing support. It really helps me out to have loyal personal sponsors sticking with me in Europe.

“I couldn’t be any happier. The GT3 is certainly a lot different to the Porsche, both are great cars but the GT3 is just that next step.

“Obviously with alot more aero along with ABS and traction control it really does make it extremely difficult to find those extra tenths on the other competitors. The Mercedes certainly feels like a great platform and definitely gives you a lot of confidence behind the wheel,” Love said.

Love also highlighted the challenges he has been forced to overcome being based in Stuggart, Germany in ongoing challenging lockdown conditions.

“For sure it is never nice being in lockdown and I do struggle with it especially being on the other side of the world but I guess it’s no different to last year so I’m used to it now. As always I have been working with Josh Webb from 1 Percent Performance on adjusting my program to suit the equipment I have access to but also to make it enjoyable,” Love said.

The former dual 2017 GT3 Challenge Cup and 2019 Porsche Carrera Cup Australia Champion Jordan Love will join with Yannick Mettler and Miklas Born at the wheel of the #40 Mercedes-AMG GT3 in the Silver Cup.

Love was forthcoming about his goals and class chances this weekend.

“The goals are still the same we want to be at the front of our class, we had some issues with the car at the first round but the team at SPS have been working extremely hard on the car over the past few weeks to make sure that won’t be a problem this weekend,” Love said.

“Paul Ricard is a mega track and is where we had the pre season test so we have a lot of data and track knowledge of this car on this track. Overall I am really looking forward to the weekend as usual and also going from a 3 hour race to a 6 hour will be a new challenge along with racing into the night,” Jordan said.

Director Ben Blackburn said: “I am really proud to keep this sponsorship and partnership going with a driver of Jordan’s calibre which we began with him back in early 2018,” Ben said.

“Jordan is a winner. Its really that simple. From his open wheeler Formula BMW days in Asia Cup to his Porsche GT success, the way he goes about his motorsport, his attention to detail, his constant professionalism, the way he engages with his sponsors and his training and preparation with Josh Webb and 1 Percent Performance is a real credit to him.

“Jordy is a fantastic Ambassador for our brand and our values on the International motorsport stage and its something I take personally. We couldn’t be any happier with his career progress.

“Some teams would of liked him driving for them in Super2 or even Supercars and there was some interest in him there after he did just one test day at Winton as he was doing seriously competitive lap times,” Ben said.

“But for the longest time Jordy has had this goal to build his own GT career in Europe and now to see him doing that and getting some solid results is pretty impressive.

“He is where he needs to be at this stage of his career and we cant wait to see what else he will produce this year with SPS Automotive Performance in Europe,” Ben said.

“During the tough lockdown for Jordan overseas we have been running his training via zoom and home programs to keep his body in A1 condition,” Josh said.

“It is a hard process for any athlete to endure while racing but I must say his attention to detail and resilience has been pretty amazing to see.

“I am really looking forward to seeing the young lad shine in the Mercedes as he gets his head around so many new tracks and elements,” Webb said.