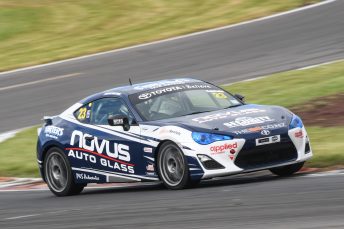 A relative late starter in motorsport, Howick’s Jordan Baldwin is making up for lost time.

Baldwin (19) currently leads the rookie standings in the premier Toyota 86 Championship and is seventh in the Championship.

His motorsport career started ‘late’ at the age of 14 in a somewhat unorthodox form: youth ministocks, taking out the rookie of the year title 2012-2013. He went karting for two years, then stepped up into the BMW one-make race series, winning a scholarship to race in 2016 and finishing the year fourth overall, top rookie.

In each category the aim has been to amass as much experience as possible in the shortest time, ever aware that in Motorsport the clock is forever ticking.

In karting, Baldwin went straight into the championship classes. Where many racers who started younger might have ‘served the apprenticeship’ it was a sink or swim approach that paid off handsomely.

The first six months were a steep learning curve. Though the strategy included buying the best possible kart and equipment, Baldwin found himself fighting his way up through the pack – a risky place to be, where it’s easy to be snared in someone else’s accident.

“But then we were on the pace, qualifying with the front runners and it all came together. We progressed very quickly after that,” he said.

Next came a scholarship drive in the successful BMW E30 series, where the grid consistently top 40 cars.

“This was the big step up into full sized cars. The BMW series taught me a lot about racing close but clean.”

Being accepted for – and then topping – the 2017 New Zealand Motorsport Elite Driver Academy helped hone Baldwin’s skills and gave him insight into other aspects of being a successful racer. Interacting with other drivers in the group was also valuable.

“So now we’re in our obvious next step, the Toyota 86 Championship. It stood out for us because it appeared to be the best and most professionally run series of its type.” Baldwin said the biggest attraction is the close racing, the media coverage and the professional attitude of the drivers.

Once more, the team has chosen to buy the best car available: Ash Blewett’s championship-winning car.

“With the Championship switching to a semi-slick tyre this year we have had to work on our car setup, the technical nature of Taupo [the second round] and the effect of the high temperatures on the tyre had us stumped for a while but it’s all about learning, we’re really looking forward to the South Island rounds.”

To prepare for racing at Ruapuna near Christchurch and then Teretonga near Invercargill, Baldwin has the use of sponsor Carters’ Tyre Service’s sophisticated driving simulator and will drive laps of both tracks over and over during the Christmas break.

Like many rising race stars today, Jordan Baldwin is dividing his time between top level motor racing and tertiary study, working toward a Bachelor of Commerce at Massey University in Albany. With most of its rounds falling in university’s summer break, the Toyota Championship fits neatly between his study commitment.