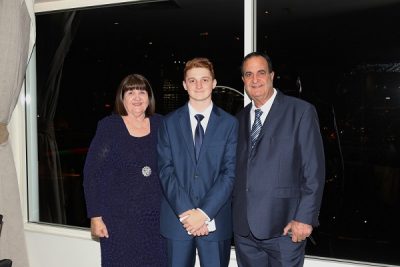 Teenager Ardie Jonic’s 2017-18 season achievements were celebrated during the annual Speedway Australia Awards at Brisbane’s Rydges Hotel in Queensland on Saturday night, when he received the highest honour for junior speedway drivers, being named Junior Competitor of the Year.

Despite an incident with a cyclist earlier this year causing major setbacks in his season progress and resulting in him spending a period sidelined while he was recovering from a broken leg, Jonic overall during the season racked up a whopping 18 feature-race wins, including a successful Victorian Title defence aboard his Vic # 1 Daihatsu Charade.

This wasn’t the first time the Ipswich, Queensland-based racer had received the prestigious award, previously taking the mantle in the 2015-16 season, and having been a model of consistency throughout his career, this season was no exception. “I race for the enjoyment and thrill that I get from it, so to be recognised for my achievements on such a large scale is a huge honour for me,” commented the 16-year-old racer, who has also created history by collecting the most state title victories out of any Junior Sedan competitor with a total of seven.

“It’s definitely been a challenging season, with my accident putting me on the sidelines for over two months, but considering that, I’m proud of what I’ve achieved so far this season. I can’t thank my nan and pop (Surelle and Lubo) enough for making it all possible and for encouraging me to be the best I can be.”

Jonic is now be turning his focus to his road racing commitments for the next two days, when he will be completing a test session at Sydney Motorsport Park (NSW) aboard his AGI Sports Formula 4 car. This is the first time he has stepped into a Formula 4 car since his impressive CAMS Jayco Australian Formula 4 Championship debut recently at Phillip Island Raceway in Victoria.

Following his Formula 4 test session, Jonic will then board a plane on Tuesday night with his nan Surelle to the Northern Territory to contest this Friday and Saturday night’s National Junior Sedan Title at Darwin’s Northline Speedway, while his pop Lubo is currently on the road transporting the race car up to the Top End.

“After running second in last season’s National Title, I’m aiming to go one better this time around and taking home the win,” he enthused. “It’s certainly not going to be easy, with around 60 drivers nominated, but I’m really looking forward to the challenge and I’m just going to try and remain as consistent as possible throughout qualifying heat races to set myself up with a strong starting position in the feature race, which I think is going to be key.”

Following the National Title, Jonic will attempt to defend his Northern Territory Title at Katherine Speedway, which is located 300km south of Darwin, on the Saturday night of July 7, before returning to his home state to contest the third round of the CAMS Jayco Australian Formula 4 Championship at Queensland Raceway (Qld) on July 20-22.

Jonic would like to give special thanks to his nan and pop (Surelle and Lubo) for their ongoing support.

To find out more about Jonic and to keep up to date with his recovery, LIKE him on Facebook by searching Ardie Jonic Racing Team #50.