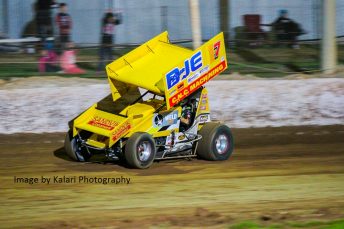 Speedway Wangaratta closed out its race season with something for everybody on April the 29th with Sprintcars sensational on the 500 metre dirt track hitting huge speeds and setting almost 12 second laps as Dennis Jones motored on to a victory, a Demolition Derby and a Fireworks display closed out the night sending everybody home with a smile on their face.

The Sprintcars from the Victorian Sprintcar Association competed in two heats after a timing mishap earlier in the night curtailed plans for a time trial session that was supposed to be a part of qualifying.

In hot laps earlier, Dennis Jones ran a new track record of 13.070 smashing any other previous time by any form of Sprintcar at the track with a 13.070. Steenholdt then clocked a 13.064 for a new record in the attempted time trial session that was eventually aborted. Incredible times on a wonderful track the crew had prepared.

The feature race was looking every bit like Bobby Daly’s until mechanical issues curtailed his opportunity to win bringing him to stop in turn one whilst he was out front with Jones chasing. After Daly’s restart and subsequent rear of field demotion, Jones was just too quick and spot on hitting his marks as he careered away to a big win in front of Greenwood, Steenholdt, Noonan, Matt Symons, Laity, Daly, Siely and Dave Dennison.

Trevor Perry won the Wangaratta Cup for Grand Prix Midgets going back to back defending last year’s win despite not finishing the second heat race. Perry won the first of three qualifying races with Travis Florimell winning the second and third ensuring he was the top qualifier for the final and starting from the back of the field. Perry went on to a massive win in the final from Florimell, Chris Fowler, Paul Perry and Lisa Chalcraft.

A huge crash in the Sports Sedan final to Victorian champion Jamie Paull whilst in the top four sucked the wind out of an enthusiastic crowd who all had their hearts in their mouths until he walked away from the crash having just driven at full speed head on into the concrete wall. Luke Fallon who was the top qualifier with two wins and second through the night took the feature win from Matt Stampfli, Liam Powell, James Powell and Peter Eastham.

Darryl Joosten continued on his impressive run this season with victory in the Standard Saloon final in a race both he and the second placed race Gary Evans both enjoyed. Evans from Yarrawonga and Joosten from Albury ripped around the track with Evans stuck literally on the rear bumper of Joosten trying to find a way through to the lead. Joosten and Evans finished ahead of Trevor Evans, Liam Powell and Kenneth Mankey.

Toby Carmichael won the Junior final from Ashleeh Bunt, Jake Cottier, Ruby Pritchard and Tamsin Collins whilst Alyce Iaria despite a huge earlier crash wrecking the back end of her race car, won the Ladies Sedan final from Fluer Heiner and Simone Hodgetts.

Finally to end the night the crowd was in full voice for the end of night Demolition Derby where Lucas Williams and Cody Shmal went head to head after the elimination of six other competitors left them the last two standing. A rear to rear hit in the last attempt to take each other out finished off Shmal and Williams went home the winner taking out the Station Wagon with his Magna!

The Patton Automotive best presented went to Zac Whytecross, the Scared of the Dark Lighting LED Light Bar for a Hard Luck award was won by the runner up Cody Shmal who caused the most damage to his competitors in the Demolition Derby before being put out of action himself and the Kalari Photography and Videography award for the Most Destroyed Car went to Mick Oakman a competitor from Wagga.

Fireworks closed the night and the crowd is now primed for next season which comes back around in October 2017.