Jones shaping up for championship attack next weekend

Jones shaping up for championship attack next weekend 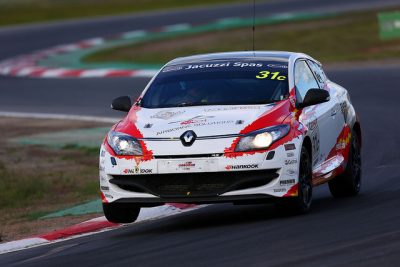 With two rounds left on the 2018 Jacuzzi Spas Australian Production Cars calendar, young up and coming racer Calum Jones is getting ready to go on the attack for the Class C championship – starting with next weekend’s Sydney Four Hour.

The Osborne Motorsport racer will be joined at Sydney Motorsport Park in the #31 Renault Megane by team boss and production car stalwart, Colin Osborne, for the September 21-23 event.

“I think we have had a pretty good season so far, we’ve had some pretty tough competition and despite some car problems along the way, we are still in a pretty good position to attack for the 2018 championship,” Jones said.

Currently, Jones is 32 points adrift of the class-leading Aubin brothers, Blake and Kyle, as the APC heads to its penultimate round of the season.

“Last year I was given the opportunity to join the Osborne Motorsport team at Queensland alongside Tyler Everingham – that was my first time in the Australian Production Car series and getting to assist Tyler in claiming his championship title in the last few rounds was a highlight for me,” Jones explained.

“Now, I think we are still in with a good chance as we head into these last few rounds.

“In Sydney we are obviously hoping to get the best haul of points we possibly can to try and reduce the gap to the Aubin brothers and maybe even hopefully reclaim the championship lead.

“From there it will be on to Phillip Island where we know our cars are really strong – Tyler and I managed to finish third outright there last year, so I definitely think we are in the hunt for the title this year.”

While his team has plenty of APC experience at the Sydney circuit, for the 18 year old from Caboolture (Queensland), it will partially be new territory – while he has visited the venue twice before with the Toyota 86 Series, this will be his first time with the APC and in a Renault Megane.

“I haven’t raced at Sydney Motorsport Park in this kind of series or car before, so I am looking forward to the challenge,” said Jones, who is studying Behavioural Science and Justice at the Queensland University of Technology.

“I have been putting in all of the practice on my SimWorx simulator that I can around my study and training.

“I am really pleased to have Colin as my co-driver again next weekend after he drove with me at Winton Motor Raceway earlier this month; I am looking forward to having his experience to learn from across the event.

“It has been an awesome experience to be able to race alongside him – he has obviously had such a large influence in this sport both nationally and internationally and it is great to have someone of his calibre to look up to and compare myself against.

“Being a part of a team like Osborne Motorsport has been a great opportunity too – the amount of work and effort which all of the guys and girls put in is really the reason why the team functions so well on and off track.

“As well as the support of Osborne Motorsport, this championship fight would not be possible without the constant support of my family and my sponsors who have been behind me from day one – I hope I can bring them all a championship this year.”

Round four of the 2018 Jacuzzi Spas Australian Production Cars will hit Sydney Motorsport Park across September 21-23, featuring a four-hour race on Sunday.

For more on the Jacuzzi Spas APC, please visit www.australianproductioncars.com.au or www.facebook.com/AustralianProductionCars or call category manager Iain Sherrin on 0422 449 446.