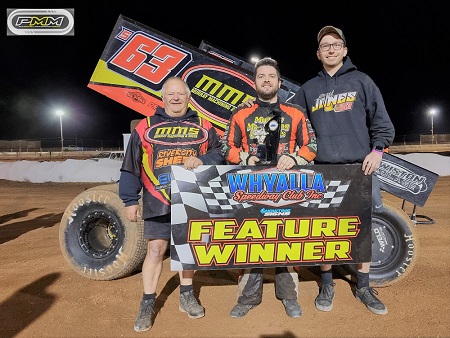 On Halloween Eve last Saturday night Murray Bridge resident Ryan Jones sent chills through his opposition as he led all 30 laps to claim the opening round of the Unearth Whyalla Sprintcar Track Championship at the Whyalla Speedway. After setting the quickest time in qualifying Jones then went on to win the opening heat with his only defeat of the night coming in the Top 6 Dash. The victory was his first at the Whyalla venue and the 30th of his Sprintcar career.

“I think Keke (Falland) showed a bit of inexperience by choosing the outside on the start, I guess he thought he could pinch me down on the start and get around the top, but I got a good start and then I was able to control the race out front. I really must give Michael (Brown) and the team here at Whyalla great credit for getting behind Sprintcar racing and putting together this series and giving us another place to race” added Ryan following his win.

Second place went to Daniel Pestka who shadowed Jones for the entire distance, but he just couldn’t find a way past. After starting on the third row Matt Egel made his way onto the podium but with the race running the final 28 laps nonstop, he simply couldn’t make the ground he lost early in the race.

Fourth place went to Riverland racer Keke Falland, who was driving his Ford powered Cool for the first time since March 2020, while Max Vidau showed good speed as he finished as the final car on the lead lap in fifth. Luke Bowey, who was also making his first start for over 18 months, and Joel Heinrich were the final finishers.

After running inside the top four Lisa Walker ended her night on the infield after the driveline fell out of the #4, while Clinton Warner and Chris James were also classified as non-finishers.

With only ten cars fronting for Round 1of the Track Championship the format was changed slightly with Time-Trials, 1 round of heats, a Dash and a 30-lap final.

In Time Trials Ryan Jones set the pace with a lap of 11.939, just edging out Matt Egel’s lap of 11.995. The heats would see the top 3 from each transfer into the dash with Jones, Pestka and Falland making it through from heat 1 while Walker, Egel and Vidau made the field via heat 2.

In the random draw for the dash positions Pestka would draw the number 1 chip but he got all crossed up on the start allowing Falland to take the lead. Falland would win the dash and then prior to the main event getting underway Falland chose to start on the outside of the front row.

Round 2 of the Unearth Whyalla Sprintcar Track Championship will take place on November 20, 2021.