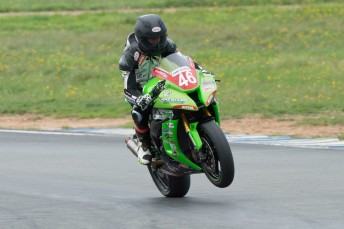 Queensland’s Mike Jones has spent the break since the last round of the Swann Insurance Australasian Superbike Championship at Mallala in recovery mode after having broken his left scaphoid in a mountain bike training accident however he is confident of succeeding at his home track this weekend despite the setback.

Whilst preparing for this weekend’s event, Mike suffered a broken scaphoid during a mountain bike exercise, fundamentally impacting his test plans and preparations for the Queensland Raceway event, however he remains upbeat of a good result with the experience he has at the 3km track.

“Unfortunately two days after the previous round I broke my left scaphoid in an incident whilst training on my mountain bike. Disappointingly I haven’t been able to ride my Crazy Dogs Kawasaki ZX10 and I opted to miss testing last week so as to get the maximum amount of healing time before racing this weekend,” Jones said.

With just four days until Mike gets back on two wheels, the 20 year old will be undertaking an intense physio regime in order to ensure he is best prepared for the weekend’s six races over two days.

Another large field of Australia’s best Superbike riders are sure to test Mike’s strength throughout the weekend though he is confident he can bring home a good result.

“The cast came off today and I’m doing some physiotherapy exercises to try and get 100 percent mobility from my hand.

“I’m hoping that it won’t be much of a hindrance for me on race day, I’m sure the adrenaline will ease the pain. I’m still confident for good results and I would really like to win and be on the podium,” Jones added.

In the break since Mallala, off-track preparation of Mike’s Crazy Dog Kawasaki ZX10 has been centred around suspension setup in readiness for the high speed and heavy braking focussed Ipswich circuit and Jones hopes this will help him score a podium in front of his local supporters.

“I’m looking forward to riding in front of a home crowd and some of my local sponsors,” Jones concluded.

Mike Jones’ next event will be round three of the 2014 Swann Insurance Australasian Superbike Championship at Queensland Raceway, Ipswich, Queensland from June 27-29.