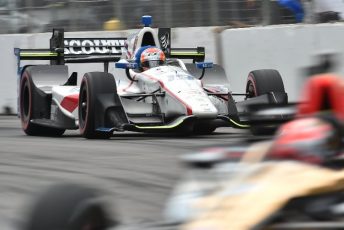 Ed Jones chanced his arm in last weekend’s Honda Indy Toronto (14-16 July) by adopting an audacious strategy that vaulted him temporarily to the front of the field – but ultimately, the Verizon IndyCar Series rookie saw his challenge scuppered by late-race mechanical failure.

Jones headed to the cosmopolitan Canadian city with prior experience of Exhibition Place’s 11-turn, 1.786-mile street circuit from two seasons of Indy Lights competition, and 66 practice laps behind the wheel of his 720bhp Dallara-Honda single-seater allowed him to reacquaint himself with its demanding and changeable nature.

The talented young Dubai, UAE-born ace missed out on advancing to part two of the knockout qualifying session by scarcely a tenth-of-a-second, restricting him to a disappointed 15th on the starting grid amongst the 21 high-calibre protagonists at the pinnacle of US open-wheel competition, in what has been billed as the most fiercely-disputed IndyCar campaign in living memory.

Spurred on by the presence in the Dale Coyne Racing pit garage of early-season team-mate Sébastien Bourdais – who is continuing to convalesce from the hip and pelvis fractures he sustained in a qualifying accident for May’s Indianapolis 500 – Jones immediately set about gaining ground in the race, and following an early full course caution period, he went on the attack.

After despatching Max Chilton, JR Hildebrand and Marco Andretti in quick succession, the reigning Indy Lights title-holder scythed his way boldly into the top ten by lap 20. He subsequently pulled off a superb pass on 20-year IndyCar veteran Tony Kanaan as he infiltrated the fight for fifth, and he had risen as high as seventh when the yellow flags appeared again for a car in the barriers just before one-third distance.

With threatening skies and precipitation in the air, DCR elected to roll the dice by leaving Jones out on-track as the majority of his rivals dived for the pit-lane for a fresh set of tyres. That elevated the 22-year-old Brit to second behind eventual winner Josef Newgarden, but with the anticipated rain failing to materialise, he found himself increasingly struggling for speed on his worn rubber and had to really get his elbows out to defend his position as his pursuers piled on the pressure.

After valiantly waging a losing battle, Jones was forced to pit on lap 33 as his Firestone reds cried enough, relegating him to the rear of the order. Despite having to additionally contend with a fractured left foot from a previous race, the Williams-Harfield Sports Group protégé was on the comeback trail and embroiled in a multi-car scrap just outside the top ten when he rolled to a halt with an oil pressure problem with just nine laps left to run.

His misfortune has dropped Jones to 12th in the drivers’ standings ahead of the next outing on the 2017 IndyCar schedule at Mid-Ohio Sports Car Course (28-30 July), where he is determined to convert his palpable pace and potential into a solid haul of points.

“Toronto is one of my favourite races on the calendar,” reflected the former European F3 Open Champion. “It’s a difficult track and very bumpy, and you frequently find yourself sliding around in the corners. It’s also very technical and tight in some sections, while the continually evolving grip levels and surface changes mean it is tricky to strike the optimum set-up.

“Getting up-to-speed went reasonably well in practice, although we struggled with the balance of the car in the first session and in the second session it got a bit worse. We tried to fix it, but we didn’t make as much progress as we would have liked. Toronto also requires much more braking than Iowa, but whilst my foot hurt a lot, I have a high pain tolerance and was able to brake without any dramas.

“We made some changes for qualifying, but it was a tough session – the jump with the alternate Firestone red tyres was very big. I thought I drove a pretty good lap, but I missed out on the Fast 12 by just a little bit. It was close, as usual, but frustrating at the same time.

“In the race, we picked up quite a few spots passing cars during the first stint and I felt like we had the pace to be in the top six, but we got unlucky with the caution and that sent us to the back. We gambled on rain coming, but it didn’t pay off. At the end of the day, we had an oil line issue so it wouldn’t have worked out anyway, but it was good to see that we had a lot of potential and we’ll try to carry that forward to Mid-Ohio.”