Jones back in victory lane at Murray Bridge

Jones back in victory lane at Murray Bridge 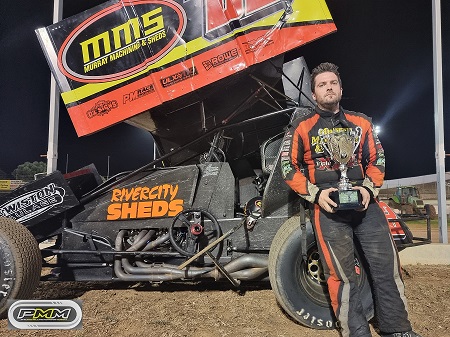 The final round of the Murray Machining and Sheds Murray Bridge Speedway Sprintcar Track Championship proved to be a torrid event on Saturday night with only seven of the initial sixteen starters making it the chequered flag. The night was plagued with mechanical issues, controversial decisions and several crashes but when the 30 laps were done it was local racer Ryan Jones who crossed the line first ahead of Daniel Pestka and Luke Dillon.

After initially trailing early race leader David Murcott, Jones took the lead after Murcott rolled in turn four after being caught up with the slower car of Ricky Maiolo, who had hit the turn four wall. Murcott was the next car on the scene and rolled trying to avoid the incident. Jones who was following was also involved in the crash but was able to restart at the front of the field with a damaged front wing.

“I don’t think I have won a 410 race here for a couple of years, I think it was when we slid by Veal to win a round of the USC, so it’s good to finally get that off my back. When I crashed into Dave (Murcott) I was really worried for him because of where I hit the cage, so I glad to find out he was ok.

My guys worked really hard tonight, and we were working on this car all week to get ready. I can’t thank Darryl and Val Wright enough, as they have been instrumental in my Sprintcar career, so it’s great to repay them with a win at a track that they have thrown so much support behind” added Ryan following the main event.

Jones wasn’t the only podium finisher who was involved in a racing incident as both Pestka, and Dillon also had their dramas. For Luke Dillon his issues started before the yellow lights went out as Lisa Walker spun in turn four before the cars formed up with Dillon making contact with the #s4, ripping out the tail tank and ending Walker’s race before it began. With Dillon stopping on track, he dropped from the pole to the back of the field.

He was then involved with Brendan Quinn in the same part of the racetrack on lap 20 so the fact he managed to finish third was an outstanding result.

For Pestka, the runner-up position was a huge fight back after struggling in time trials, but he too was involved in a controversial moment as he tried a huge slider on Brad Keller in turn three as they battled for third, with Pestka’s #27 jumping over the left front of Keller’s Maxim forcing a premature end to Keller’s season. Pestka completed a full spin but was able to keep the car running and restarted from position three, behind Jones and Joel Heinrich.

While this was going on Max Vidau ran out of fuel, while running inside the top five, due to the number of roll around laps ending an impressive run. For Vidau it was first time he had been in the car since Boxing Day, and it will be final time for a while as he will now concentrate on his circuit racing career in his Porsche Cup car.

Once Vidau retired the final 10 laps were run with only seven cars left on the track with Heinrich, who held second for a portion of the race, finishing fourth after losing out to Dillon with two laps to go, while Victorian Todd Moule, Broken Hill’s Stacey Galliford and Mike Fox being the only other finishers.

Matt Egel, who was debuting a new car had teething issues with his new Cool all night, which included breaking the throttle linkage in his opening heat, retired early in the A-Main due to a rear bar failure.

Earlier Time Trials saw both Ryan Jones and Matt Egel set the identical time of 11.462 to pace the field while Dillon, Jones, Pestka and Murcott were the heat winners.