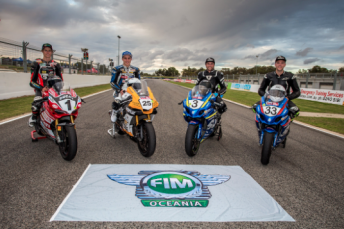 MEDIA RELEASE: As a sign of the continuing strengthening of road racing championships on both sides of the Tasman, and the relationship between Motorcycling Australia and Motorcycling New Zealand, the FIM Oceania board have brought forth the 2016 FIM Oceania Road Racing Championship which will kick off at Morgan Park Raceway on August 5-7.

The 2016 FIM Oceania Road Racing Championship will run alongside the two remaining rounds of the 2016 Yamaha Motor Finance Australian Superbike Championship presented by Motul Pirelli, and will see representatives from both countries compete for the FIM Oceania Championship for their respective countries.

DesmoSport Ducati pilot Mike Jones and Jon Daniels Racing Daniel Falzon will go head to head with New Zealand’s Sloan Frost and Ryan Hampton on August 5-7, at round five of the ASBK, with all four riders not only looking to defend their positions in the ASBK Championship but to compete for their country.

Falzon, last year represented Team Australia against New Zealand’s Hampton, and managed to claim victory for his country. Today Falzon spoke about the honour of representing Australia for the second consecutive year.

“It’s a great honour to be once again representing Australia in the FIM Oceania Challenge,” he said.

“I think this year especially is going to be bigger than last year, being over two rounds and two riders from each country representing.

“I am really looking forward to racing these next two rounds, and obviously I am just going to go about my normal thing and try not to add too much stress on myself and just try to get some great results.

“I am feeling pretty confident heading in to the two rounds, Morgan Park is a track I rode last year and did quite well at, and after testing last week I feel quite confident to back it up,” Falzon concluded.

Frost, who is one of the members of the New Zealand Team, and is also currently racing full time in the ASBK Championship, described his feelings of being selected to represent his home country and his excitement to race at Morgan Park for the first time in his career.

“I am pretty excited to be a part of the FIM Oceania Championship, I have always wanted to push to race against the class of riders there are in Australia and to do that representing my country is a bonus,” Frost shared.

“In the future it would be great to be able to get the Australian representatives back on to our tracks in New Zealand, I think the Australian guys would be a little bit surprised by the pace of our boys on our own tracks.

“With both Daniel and Mike doing well in the ASBK Championship so far this season we are definitely going to have our work cut out for us over the next two rounds, but hopefully we can make gain to close the gap.

“Morgan Park seems to suit my Suzuki well, and at the test last weekend we had reasonable times, so I am really looking forward to competing and it’s just up to us to take that next step and try and challenge Daniel and Mike,” Frost ended.

FIM Oceania President Tania Lawrence shared that she is pleased about the selection of the representative riders, and spoke about her excitement in seeing the Championship continue to grow, and the bond between countries to strengthen.

“What an outstanding way to finish the last two rounds of the ASBK Championship, with the integrated FIM Oceania Championship also to be won over those two weekends,” she said.

“It is great to be able to bring the countries a little closer together and to be hosting some of our New Zealand relatives right here in Australia. We are very proud of how the Championship is progressing and to be able to offer this opportunity to our competitors.

“The FIM Oceania Road Racing Championship will certainly contribute to the growth of the sport in both Australia and New Zealand, and we look forward to seeing how it all progresses onwards in the future,” she concluded.

Not only will competitors Jones, Falzon, Frost and Hampton battle it out at Morgan Park Raceway, the FIM Oceania Road Racing Championship will also carry on to the final round of the ASBK Championship at Winton later this year, in one final dash to the finish line.

The penultimate round of the 2016 Yamaha Motor Finance Australian Superbike Championship presented by Motul Pirelli will be ran at Morgan Park Raceway next weekend, August 5-7.