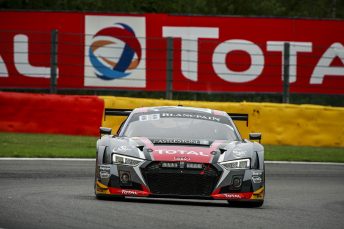 Jonathan Venter is focused on finishing his inaugural Blancpain GT Endurance Series season on a high note, with the Australian driver determined to make his first visit to the Circuit de Barcelona-Catalunya a memorable one in the #3 Audi R8 LMS.

The young GT driver will partner with Josh Caygill and Clément Mateu in the Pro-Am category for the three-hour endurance event at the 4.655km circuit. Venter has spent the previous four rounds continually developing the Audi R8 LMS and has helped hone WRT’s race strategy to create a winning combination.

“It is the final race of the year and we have learnt a lot over the four races already, trying to develop the car and getting our strategy to work better,” said Venter.

The #3 Belgian Audi Team WRT driver will be contesting the Spanish track for the first time in his career and is confident that after a season of development, his Audi R8 LMS has what it takes to close out the year with a good finish.

“Hopefully we will be able to finish the year on a high note. It is my first time at Catalunya, so I am excited to learn the circuit and I hope that we can produce some strong results to end the 2017 season,” said the #3 driver.

While Venter must get to grips with the track in the early sessions, his growing experience behind the wheel of the #3 Audi should ensure that he is quick to find his feet and should be able to begin turning laps at full pace in no time.

Vincent Vosse, Team Principal of WRT, has every faith in Jonathan and said, “It is the last race of a season that has involved ups and downs for Jono’s car. Nevertheless, I must say Jonathan has shown great speed in the car but also a lot of maturity despite the results not being as expected. A few months ago, I remember we had one goal with Jonathan: put him in the same conditions as the Audi works’ drivers and see how we can rate him as a driver. Jonathan proved that he can do the job despite having less time in the car, and for this reason I hope we can find a way to keep him in the team in the future. But before this, we must try to conclude the season with a high in Barcelona!”