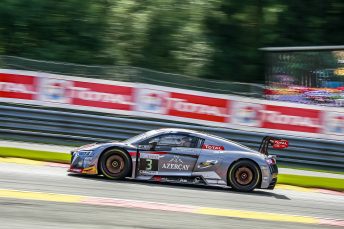 Jonathan Venter delivered another strong performance at the Total 24 Hours of Spa, running as high as P7 in the Pro-Am class and 21st overall in the #3 Belgian Audi Club Team WRT Audi R8 LMS. Unfortunately, despite Venter’s excellent pace and consistency, a racing incident dashed any hopes of a good finish for the Australian GT driver and ruled him out of the race after 233 laps.

“I was really happy with the car, we developed it really nicely during the tests but we knew our outright pace probably wouldn’t put us in super pole, so we focused on trying to get a good race setup. I was really happy with my qualifying pace, I beat the marker I set for myself and I was only 1.5 seconds off pole position, which around Spa is a really good effort,” said Venter.

The famous 24 Hour race got underway without incident, with all competitors gracefully weaving through the opening corners without causing chaos. Venter’s teammate, Josh Caygill, opened with the first double stint and managed to keep the #3 Audi in a good position before passing the car over to Venter.

The #3 driver soon got the car up to speed and continued to find more performance as the temperature around the 7.0km circuit began to drop. Venter found his groove and was lapping consistently to put him on par with the rest of the Pro-Am field, which allowed the Blancpain GT Endurance driver to complete his double stint without incident and hand over to his teammate before his next stint early on Sunday.

Venter got back in the #3 Audi R8 LMS about 3:30 am and things were looking very positive for the team, with his three teammates having done a stellar job to keep the Audi in the fight for the Pro-Am podium. After a brief safety car period, Venter managed to close in on a pack of cars ahead and began the delicate task of overtaking them. After being blocked behind the #00 Mercedes of Kamui Kobayashi for multiple laps, Venter carefully chose his moment to pass into Blanchimont but he was forced to swerve to the outside by the Mercedes, putting a wheel on the grass, which rotated the car and forced him into the path of an oncoming racer. This caused significant damage to the front-left corner of the #3 Audi and forced Venter’s early retirement roughly half way through the 24 Hour endurance event.

Venter reflected on the incident and gave his thoughts on his 24 Hours of Spa challenge, “We were strong in the race, all the drivers had done a really good job and we were making up positions every hour. If we stayed consistent we were looking to give the Pro-Am podium a good shot. It is just unfortunate that I had an accident, which in my opinion wasn’t my fault, but it was something that took us out and it was sad to finish on a bad note.”

It was not the ending the young driver was hoping for but there were many positives to be taken from his performance this weekend. Venter says that, “It was a positive weekend overall, we developed the car quite well with Richard Lyons and the other two drivers in practice, making the car better than we have had it so far this year. We have one more round left in Barcelona, I am very confident with the car now, our outright pace is a lot better and I hope we can give the last round a really good go to end the season on a high.”