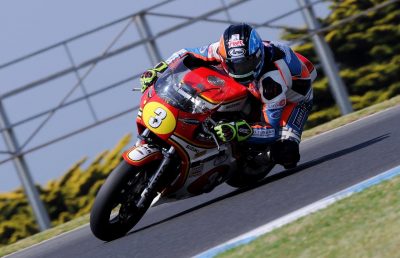 Thirty five year Johnson, who hails from Adelaide but races primarily in the UK, took the lead spot for the weekend’s four six lap races to put Australia in a solid position as it attempts to reclaim the title from the UK. His time of 1m37.352s on his 1982 Suzuki XR69, knocked the UK’s star rider and defending Island Classic champ, Jeremy McWilliams back to second place on the leader board.

McWilliams had set the pace in first and second qualifying before Johnson’s late dash. His time of 1m37.642s aboard his Yamaha Harris F1 will see 53 year old McWilliams start second in racing, with Australia’s Paul Byrne third on the grid (McIntosh Suzuki).

The top ten were separated by just 1.5 seconds, with the UK showing their strength with five riders in the ten including BSB campaigners Peter Hickman and Daniel Linfoot, the experienced Michael Rutter and Glen Richards.

The UK has dominated the Challenge in recent years, winning the past three titles, but this year the competition has stepped up a notch with the USA and Australia being boosted by the inclusion of former MotoGP rider Colin Edwards and Australia with world superbike star Troy Corser.

Edwards, despite only two laps on the bike before yesterday, will start 6th on the grid aboard his Suzuki XR69, with the US also strong with former AMA stars Jason Pridmore qualifying 7th and Jake Zemke taking 11th.

Australia also looks solid with Beau Beaton on the Vincent Irving in 10th, Corser 12th as he sorts his Harris F1, Steve Martin 13th and Shawn Giles taking 14th on the Suzuki Katana.

The International Challenge is the headline act for the 25th AMCN International Island Classic, one of the world’s great historic bike meets, with over 500 bikes and 300 riders competing over 56 racers.

Special guest for the weekend is the greatest motorcycle racer of all time, Italy’s Giacomo Agostini. Now 75 years of age, he won 15 world titles in his illustrious career in the ‘60’s and ‘70’s. He’s travelled to Phillip Island from Italy with four beautiful MV Agustas, two of which he won world championships on.