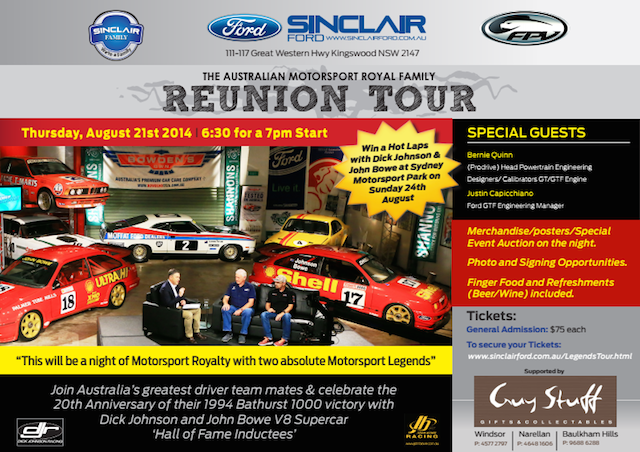 Johnson and Bowe will hold their latest dinner in Sydney

Sydney will have it’s chance to catch icons Dick Johnson and John Bowe at an upcoming event where the two will share more stories of their time together at DJR.

The reunion tour dinner will take place in Sydney on Thursday 21st August as the pair ready for the upcoming V8 Supercar round at Sydney Motorsport Park.

The iconic pair had an 11 year partnership at Dick Johnson Racing, they are without doubt the best driver pairing in Australian motorsport history.

In the Sierra days they were almost untouchable and stand out drivers in their own right. Of course, Dick Johnson has won five Australian Tour Car Championships and he has three Bathurst 1000 victories, twice with Bowe.

Bowe on the other hand is statistically the most successful driver in Australian motorsport – wining six national championship in four different categories.

More recently he has dominated the Touring Car Masters Championship and again is the series leader heading into Sydney Motorsport next weekend.

Johnson said: “It’s great to have JB with us at DJR, he’s a real asset to have around the garage. His level of motorsport knowledge is remarkable and he quite often has a word of encouragement for our drivers David (Wall) and Scott (Pye).

“We have plenty of stories to share, we were together for 11 seasons and had some fantastic results during our time. If you love your motorsport – you shouldn’t miss this night”.

Bowe added: “I always enjoy my time with DJ – although I’m not quite sure he feels the same! One thing for certain is we always have a good laugh.

“In the 11 years we drove together, Dick and I never had a cross word. It’s remarkable really. I crashed his cars, blew his engines up and he never once said anything. If it were me, I’d have gone off like a hand grenade’ Bowe said with his cheeky grin.”