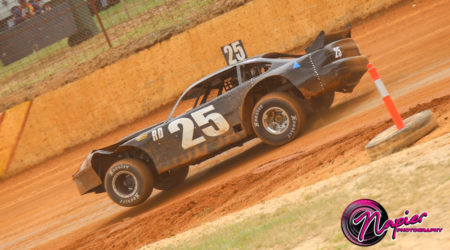 Sale resident and speedway racer Johnny Young is ready to get back behind the wheel after a tougher Covid 19 period of life than many would have endured, and he cannot wait to express himself on the dirt tracks of Gippsland and Northern Victoria after Christmas now that clubs believe they can make financial ends meet under the current restrictions.

Young has been racing since he was 16 years old on and off when his old man the late Gary Young brought him his first race car, unfortunately for Young his father passed away recently, and he is trying to get on with things and honour his father on the racetracks. After many weekends at Alexandra Speedway following and learning from his father, also his idol, Young has taken in race driving knowledge and some technical and racetrack tricks his old man shared with him along the way and continues on with his father’s race number, 25.

Young shares “Racing is something that is deep rooted in our family. My Uncle Ron Dalton and Cousin Clint raced, ending their careers in Sprintcars. I had uncles racing Standard Saloons and some Demolition Derby events in our family also. There was always somebody to be inspired by. “

Having driven numerous different types of race categories over the last 20 plus years with Crash and Bash being one of the most popular of those, Young now races a Chevrolet LS 5.7 litre engine powered Dodge Viper in the Victorian Speedway Council Unlimited Sedan class.

Young speaks approvingly about the class. “Unlimited Sedans popularity is going through the roof right now. We have doubled the number of registrations of race cars this season compared to last season, and we did not know we were going to have a season until a couple weeks ago. The drivers in the class are genuinely fantastic, kindhearted people. We help each other out to keep cars on track, we laugh, we stir, and we congratulate each other on our racing achievements. It really is a good feeling to be in this class.” Shared Young.

Now that racing is up and running Young has his sights set on a busy five months or so of racing. “We are going to go to Bairnsdale on January the 9th coming up in a few weeks. Then we go to Wangaratta in early February and back to Bairnsdale for our Victorian title 20th of February. After that we will get to Alexandra, Wahgunyah on the Murray River, Nagambie and Nyora to complete our Lucky 7 Series for the class. I will finish off the season at the Alexandra 100 Lap Derby and in between we might get to Drouin a few times in West Gippsland. “Said Young.

The class has fantastic drivers that Young hopes to be mixing it with this season. “We had a great run at the Victorian title at Drouin last season prior to the Pandemic cancelling last season. I took away a lot of confidence from that run and now I believe in myself, I believe I should be finishing in the top five and I believe I can finish on the podium on a regular basis. I have raced against our Victorian Champion Warrick Taylor from Cranbourne since we were both aged 16 in Junior racing. He is a very talented driver that we strive to be as good as. Peter Cox from Melbourne’s Northern Suburbs is another we must contend with. He competes with a 6 Cylinder engine against us eight-cylinder powered racers and is a podium regular, very difficult to beat. Daryl Nicolson, Darren Nelson, Darren Forrest, and Sean Lister are other drivers that come to mind that we must mix it with. You know your fast if these guys are behind you at the finish line.” Said Young.

Speedway is family and Young Racing is all about family. The team crew is family with Johnny supported by his Mum, Tabatha, Russ, Nathan, Tayla, Phil, Cara, Mark, Jason, Anthony, Peter, Chris & Kev. Most importantly Johnny’s soon to be wife Cara has been so supportive of his passion for Speedway and together Cara and the girls enjoy the Speedway family as much as everybody.
Johnny has made great friends, his Speedway family and loves spending time with the people involved.

Johnny would also like to thank his sponsors Northern Suburbs Radiators, Taylor’d Fabrications and Napier Photography. With their support, racing is a lot easier for me, I appreciate their support.