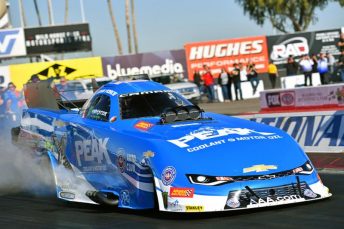 John Force is ready to launch into 2017

MEDIA RELEASE: Sixteen-time NHRA Mello Yello Funny Car champion John Force will mount his assault on an unprecedented 17th title when the series opens up the 2017 campaign this weekend with the Circle K Winternationals at Auto Club Speedway in Pomona.

The partnership has already proven worthy. Force was fourth-quickest during last week’s Nitro Spring Training at Wild Horse Pass Motorsports Park in Phoenix. The test should prove to be a springboard to a successful season.

Force is a 16-time winner at Pomona, a track just 20 miles from his team’s headquarters in Yorba Linda. Of those 16 victories, seven have come in the Winternationals

“It sets the pace for the season, the mood of the season,” Force said. “We’ll get after it. We’ll take what we learned from the test, make some adjustments, and go to Pomona.”

And like his previous 34 fulltime seasons, Force’s mind is on another title run. The last of his Funny Car championships came in 2013, with Prock leading the crew.

“That’s the dream; that’s what you go to bed (thinking about) every night,” Force said. “But I know my daughter Courtney’s looking at that, as is Robert Hight, and so are 20 others out here. But if you didn’t have the dream to win, you wouldn’t chase it. Every kid out here believes they can just get on a roll and make it happen. I’m going after 17; I don’t want to stop on sweet 16.”