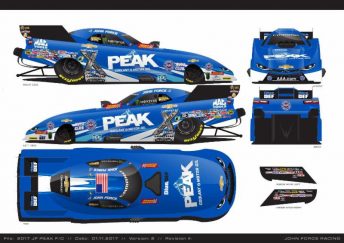 But first: preseason testing in the form of NHRA Nitro Spring Training, held this week at Wild Horse Pass Motorsports Park near Phoenix.

Numerous NHRA Top Fuel and Funny Car teams will test there starting Thursday. For JFR, the test will mark the first time on the track for two new driver/crew chief combinations.

“I feel we’re the most competitive we’ve been in a long time, and all of our cars – all three Funny Cars and the Top Fuel dragster – have a shot at winning the title this year,” said Hight, the 2009 Funny Car champion. “We made some changes over the winter and strengthened every single team. Boy, I can’t wait. It’s been too long since I’ve been out there racing, and we get back in the car in Phoenix this week. Looking forward to that.”

The goal of every drag racing team is to go as fast as possible, but getting to those fast passes takes myriad attempts. Each crew chief and team within JFR work together to achieve the goal of quick, consistent runs, and each crew chief has a plan for testing.

“The first thing we need to do is get familiar with the parts,” Prock said. “We’ll put the tune-up on these parts and then work our way through that. We’ve got a few new things we’re going to work on.”

While Courtney Force’s team remains intact with crew chief Daniel Hood and co-crew chief Ronnie Thompson, she does have new livery on her Chevrolet Camaro SS Funny Car, as Advance Auto Parts has joined the team as sponsor. Now a veteran Funny Car driver, Courtney Force is looking to improve on a 2016 season that saw her win one national event, the special Traxxas Shootout and finish sixth in the points standings.

“I’m looking forward to my sixth season racing Funny Cars at over 330 mph,” Force said. “I’m ready for the offseason to end and to get back in the seat of my Funny Car. I’ve got the same team, the same crew chiefs, and I get to start out the season with a new sponsor.”

“Right now we’re kind of focused on our shortcomings of last year, trying to work on those kinds of issues,” Husen said. “And that’s our biggest goal. What we had wasn’t horrible or wasn’t bad – we won races and did OK in the points. But right now it’s just a matter of addressing some of the things that you feel were a problem for you that you could improve on.”