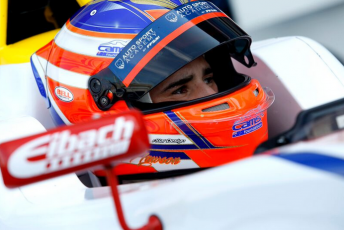 MEDIA RELEASE: international – Australian Joey Mawson will contest Round Two of the German Formula 4 Championship at the Red Bull Ring in Austria this weekend.

Placed third in the Championship standings after a strong performance at the opening round Mawson is confident of flying the Australian flag high around the 4.326km circuit.

In addition to his opening round speed, the CAMS Foundation driver is also buoyed in confidence following two successful days of testing at the Red Bull Ring recently.

What Joey has to say…..
“It’s been a fairly long gap (six weeks) in between races and during this time I’ve been very busy with testing and at the workshop with the guys at Van Amersfoort Racing,” said Mawson.

“We tested at the Red Bull Ring a couple of weeks ago where I was very comfortable in the car and finished up having some really good pace.

“The key to a successful weekend is definitely going to be qualifying well as there is only really one or two good passing opportunities, so getting a clear lap in during qualifying is going to be vital.”

About Joey Mawson
Joey Mawson is a 19 year-old Australian who hails from the Sydney suburb of Hinchinbrook.

He started his career in karting in 2003 and throughout the ensuing ten years he won three Australian Championships, a round of the CIK-FIA World Under 18 Championships and finished runner-up at the Rotax MAX Challenge Grand Finals in the UAE.

After spending 2013 based in Europe competing at the highest level of karting Mawson contested the 2014 French Formula 4 Championship where he won on debut before placing fourth in the overall Championship standings.

This year he is contesting the German Formula 4 Championship with the Van Amersfoort Racing team alongside team-mates Mick Schumacher and Harri Newey.

Live Timing from the event will be available here http://static.sportresult.com/federations/fia/app/?ref=ADAC&CLASS=ADAC_Formel_Masters

Live Streaming of the event will be available here http://www.adac-motorsport.de/livestream-adac-formel-4.html

About the Red Bull Ring
The Red Bull Ring was founded as Österreichring and hosted the Formula One Austrian Grand Prix for 18 consecutive years, from 1970 to 1987. It was later shortened, rebuilt and renamed the A1-Ring, it hosted the Austrian Grand Prix again from 1997 to 2003. When Formula One outgrew the circuit, a plan was drawn up to extend the layout. Parts of the circuit, including the pits and main grandstand, were demolished, but construction work was stopped and the circuit remained unusable for several years before it was purchased by Red Bull’s Dietrich Mateschitz and rebuilt. Renamed the Red Bull Ring the track was reopened on 15 May 2011 and subsequently hosted a round of the 2011 DTM season and a round of the 2011 F2 championship. Formula One returned to the circuit in the 2014 season.