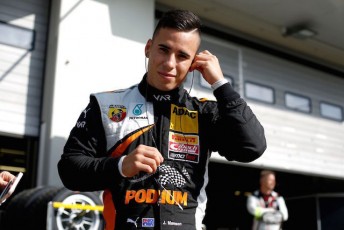 MEDIA RELEASE: Australian Joey Mawson will line up in the penultimate round of the 2016 ADAC German Formula 4 Championship at the Zandvoort circuit in the Netherlands this weekend.

Fresh from a test day at the Dutch circuit recently, the PODIUM-backed driver is high in confidence entering the home event for his Van Amersfoort Racing team.

“I’m feeling very ready and excited for the weekend ahead. It’s a home race for the team so it’s going to be pretty special,” said Mawson.

“We’ll also have the F3 team there with us as they are competing in the Zandvoort Masters, so the entire Van Amersfoort crew will be in action at the one event for the first time this year.”

Mawson rates the Zandvoort circuit highly but believes the narrow confines means that qualifying will play a vital role towards the outcome of the weekend.

“Zandvoort is a special place, in my opinion it’s probably the best circuit we have in the championship this year. It’s a real old school circuit with not much run off. You get a lot of satisfaction when you put in a good lap,” said Mawson.

“Qualifying will be the absolute key, it’s a very difficult track to overtake on. It’s basically like a street circuit, so being up the front for the races will be vital.

“I just want to keep doing what I’ve been doing all season long, aim for the podium and get as many points as possible.

“After a good test day last week I think we’re prepared as good as possible and prepared for any conditions, wet or dry.”

Mawson will take to the circuit on Friday morning for two practice sessions ahead of qualifying in the afternoon. The driver’s fastest time in qualifying decides the grid for race one and second fastest for race two. The finishing positions in the opening 30-minute race decide the grid for Sunday afternoon’s race three, with the top ten being reversed.