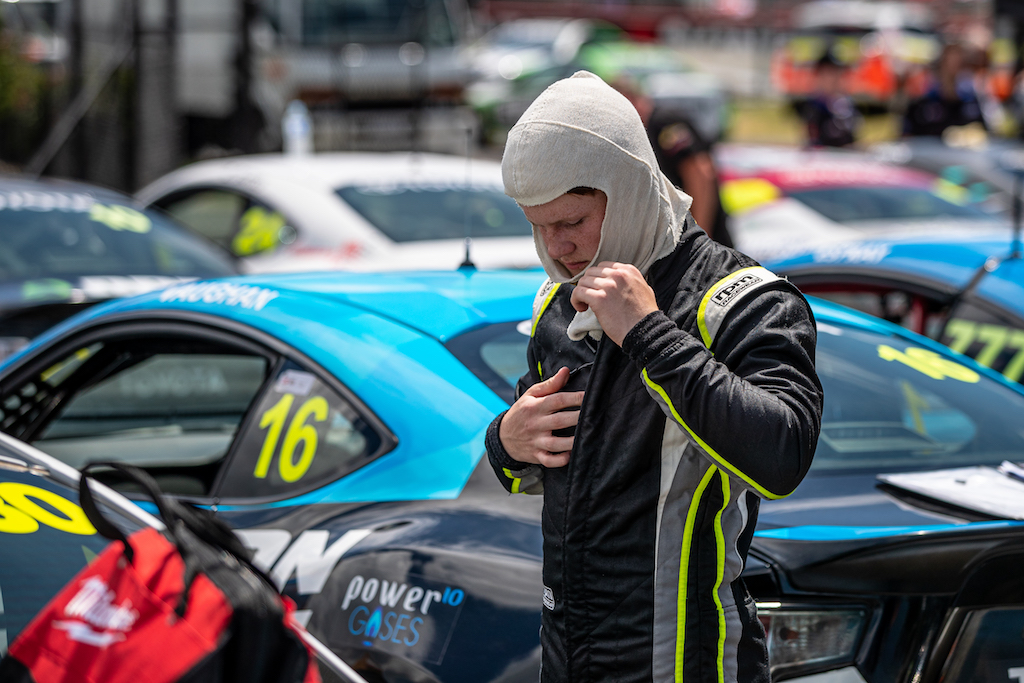 Despite feeling “a little disappointed” by his season opener at Mount Panorama, Erebus Academy driver Jobe Stewart has proven he is a competitive and determined racer in the Toyota Gazoo Racing Australia Series.

The weekend was an eventful one that saw safety cars, a cancelled practice session and fluctuating weather conditions dramatically impact all Toyota 86 drivers.

Whilst qualifying and race one didn’t go exactly to plan for Stewart, the youngster highlighted his ability to charge through the pack and gain position even in the short six lap stints.

“After our only practice session on Friday, I was feeling pretty confident and believed I could qualify in the top ten,” he said.

“By the time it came to qualifying on Saturday morning, it had rained slightly up the top half of the track and Richards ended up getting caught out, causing a red flag.

“We then basically had a one lap dash to set a time, I didn’t read the conditions very well after the red flag stoppage and didn’t push as hard as I could have.”

Starting further back than he had anticipated in 16th, race one saw Stewart’s weekend take another disappointing turn.

“In race one, I had a run coming out of the chase on the group in front,” he explained.

“I had nowhere to go so I went to the outside of another car to finish straight.

“Unfortunately for me their ABS failed a few corners before and they locked the fronts, which resulted in them hitting me pretty hard into turn one, ending up in the outside tyre barrier.”

After finding himself in the sand trap the day before, Stewart was determined to make up some ground on Sunday.

In race two, Stewart managed to move up an impressive 10 positions to finish 20th, even after the race was shortened due to an opening lap safety car.

In a similar effort, race three saw Stewart gain an additional six positions, landing himself in 14th place amongst the most chaotic race of the weekend.

“Getting put into the wall and starting last on Sunday was frustrating but was also a big learning curve,” he said.

“Although I didn’t have the best results, coming back through the pack and passing as many people as I did was lots of fun and allowed me to learn a lot about how the cars are going to react when put down the inside of someone else.”

Moving forward, Stewart is feeling confident about the next round where he is hoping to build on his Bathurst performance.

“Heading into the next round at Winton, it is a track I have been to before so I am looking forward to it and hoping that the little extra experience will help with how I perform,” he said.

“I was feeling a little disappointed after the first round, we had a few expectations which I believed were achievable, but didn’t get done.

“I still learnt a lot about coming through from the back and how it is to be racing lots of different people.”

The next round of the Toyota Gazoo Racing Australia Series will take place at Winton Motor Raceway, May 29-30.