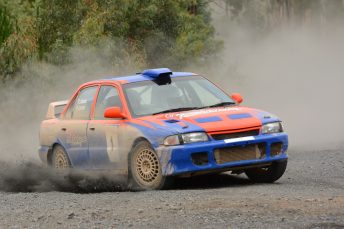 Father and son combo Tim and Peter Joass of Sydney have taken 1st Outright at the opening round of the 2017 Pipe King AMSAG Southern Cross Rally Series held in forests surrounding Oberon on Saturday. The event was conducted in unique conditions, with some stages bone dry and others extremely wet and slippery.

Joass piloted his Mitsubishi Evo 2 to a commanding lead before brake issues slowed him late in the event. He held off an aggressive late charge from Ian Plenderleith of Bathurst with Co-driver Mel McMinn of Canberra in a Mitsubishi Evo 3. Husband and wife team Adrian and Kristy Turnbull of Newcastle in a Subaru WRX, made their AMSAG debut and were impressive, claiming third outright.

Fourth was Bathurst’s Ron Moore, who had his 15 year old son Lachlan co-driving their Mitsubishi Evo 6. Sydney’s Adam Casmiri and Paul Bailey, in the first run of the Honda Civic EP3 Type R climbed back through the field after a stage 1 excursion to be the leading 2wd entry and 5th Outright

Rounding out the top ten, and first Classic home were Sydney’s David Hills and Paul Bennett from the ACT in the immaculate Pipe King Ford Escort RS 1800. The Irish celebrated the St Patrick’s weekend with Michael O’Hagan/Eoin Moynihan and Patrick O’Keeffe/Kevin Shaw making it a Ford Mk2 Escort 123 for the Classic Category after the demise of the Grimes Celica with mechanical issues.

The all-girl team of Amanda Williams and Rae Waterhouse took out the Lady Driver award in 26th O/R in a field that saw 39 of the 45 entries complete the course.

Attention now turns to Round 2 of the series to be held in Rosewood, in the NSW Riverina area.

Full results for the Oberon Rally will be available on the AMSAG website in the coming days.