Joao Vieira at work in Vallelunga and Magione

Joao Vieira at work in Vallelunga and Magione 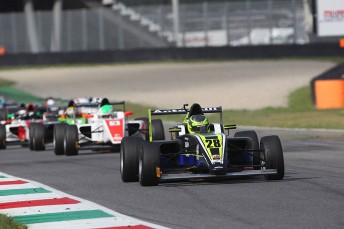 With the memory of the podium at Mugello very much alive, Joao Vieira is ready to return to the wheel of his Tatuus #28 for two days of tests on the tracks of Vallelunga (Tuesday, July 22nd) and Magione (Wednesday, July 23rd).

For the 16-year-old Brazilian driver of Antonelli Motorsport, it will be the first time both at the “Piero Taruffi” and “Autodromo dell’Umbria” Circuits, that will be the theatre of the next two (out of seven) appointments of the Italian F.4 Championship powered by Abarth, now entering into the “hot” part of the season.
Joao is ready for the second part of the season, continuing the hard work at the Driver Program Center of Forlì and galvanized by the important result achieved in Tuscany, crowned by the podium finish in Race-3 that launched him in the Top Eight of the overall standings, with the same points of his team-mate and friend Matteo Cairoli.

“Thanks to these days of tests I will have the chance to discover the next two circuits of race, Vallelunga and Magione. For me, every track is a discovery and challenge. Thanks to the simulator of the Driver Program Center, I had the chance to try the layout of the ‘Piero Taruffi’ and the first impressions are really good, similarly to what happened with Mugello.

“It would be great to repeat the result, with another podium. At each session, I take more and more confidence with the car and this helps me to get closer to the limit”, the pilot of Minardi Management says.

“After the good work at Mugello, it’s now time to get to know two other circuits in the Championship calendar. For Joao, these will be two days of apprenticeship ahead of the weekend of race, since he doesn’t know the tracks. I hope he will like them as much as Mugello, as the results have demonstrated”, the manager Giovanni Minardi comments.