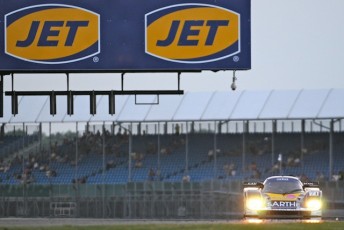 MEDIA RELEASE: Fuel brand JET, which has a network of over 350 independent forecourts throughout the UK, will once again take on the role of Official Fuel Partner at this year’s Silverstone Classic event, 24 – 26 July 2015.

In the run up to the World’s Biggest Classic Motor Racing Festival, JET will once again be giving away an incredible Silverstone Classic ‘Money Can’t Buy Prize’.

Entry closes on 18th July and full details of how to enter and Ts & Cs can be found via www.jetsc.co.uk.

As part of its 2015 sponsorship package, JET will also be sponsoring two ‘Battle of Britain’ races for 1950s and 60s British GT and saloons cars. Accompanied by alluring aerial displays by Spitfires and other Second World War aircraft, these two 20 minute races will commemorate the 75th anniversary of the 1940 air battle.

The JET Village Green and Fun Fair is set to attract high numbers of visitors.

With funfair rides and children’s activities, chill out zones, a vast array of food and drink options, a six-track Scalextric challenge, a Formula One simulator and a vintage Mustang as a ‘selfie’ backdrop, there’s something for everyone in this JET-sponsored area.

Nicolas, who lives with the neurological condition Cerebral Palsy, is the first disabled competitor to participate in the Dunlop MSA British Touring Car Championship (BTCC).

He will enter five weekends of the BTCC season in an Audi S3 NGTC with AmD Tuning.

Nicolas will be visiting the JET Hub at various points over the weekend and will be happy to chat to visitors about his first BTCC season.

Pete George, Managing Director of Phillips 66 UK & Ireland Marketing, comments: “Silverstone Classic 2014 was a truly incredible event and we were so proud to have been involved with it, particularly as it was JET’s 60th anniversary.

“We – and many of our customers – consider JET as a ‘classic British brand’, so being the Official Fuel Partner of Silverstone Classic is very much in line with our brand.

“This year – the second of our three year sponsorship deal – we’re back, but bigger and better than before!

“We can’t wait to get out there and meet as many sports and motoring enthusiasts as we can over the three days at the iconic Silverstone Circuit.”

Follow JET on Facebook (JourneyWithJet), on Twitter (@JETPetrol) to find out about our latest Silverstone news and competitions. Join the conversation using #ClassicJET for all the latest event photos and action.

Tickets for the 25th anniversary Silverstone Classic must be purchased in advance.

Adult admission starts from £40 and, as well as pits access, ticket prices include booking fees, parking, infield, grandstands, live music – this year topped by rock legends Status Quo – and the vast majority of the numerous attractions.

Full details – together with hospitality packages and weekend festival camping – can be found on the official website: www.SilverstoneClassic.com.