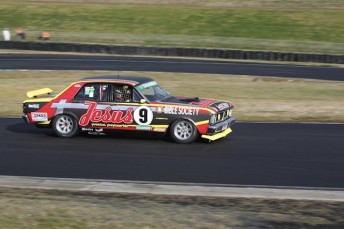 Following a successful campaign together at the Bathurst 1000 round of the Touring Car Masters the Jesus Racing team and leading damper manufacturer Supashock have been fine tuning the engineering of their Falcon XY GT with the goal of taking another significant step forward at the final round of the championship at Phillip Island next weekend.

Speaking of the development work to date, Andrew Fishtail Fisher said: “We chose Supashock as a partner because they are an Australian owned company with a global footprint which has had international success in racing. We are racing an Aussie icon in the XY GT and in its time it also took on the world being the fastest four door sedan of its time.”

“The relationship between Jesus Racing and Supashock is a match made in heaven”, laughs Fishtail.

“Seriously though, the performance gain we have already achieved from working with Oscar Fiorinotto and his team is extraordinary. The work ethic, energy and focus of the Supashock team is amazing.”

Oscar Fiorinotto is equally pleased with the progress: “I was pleasantly surprised by what we were able to extract out of the car at Bathurst, Andrew is listening to our advice both in and out of the car and as we saw at Bathurst he was able to drive around any teething issues that we experienced.”

The Jesus Racing team is expecting the XY GT to achieve a top 5 result at Phillip Island.