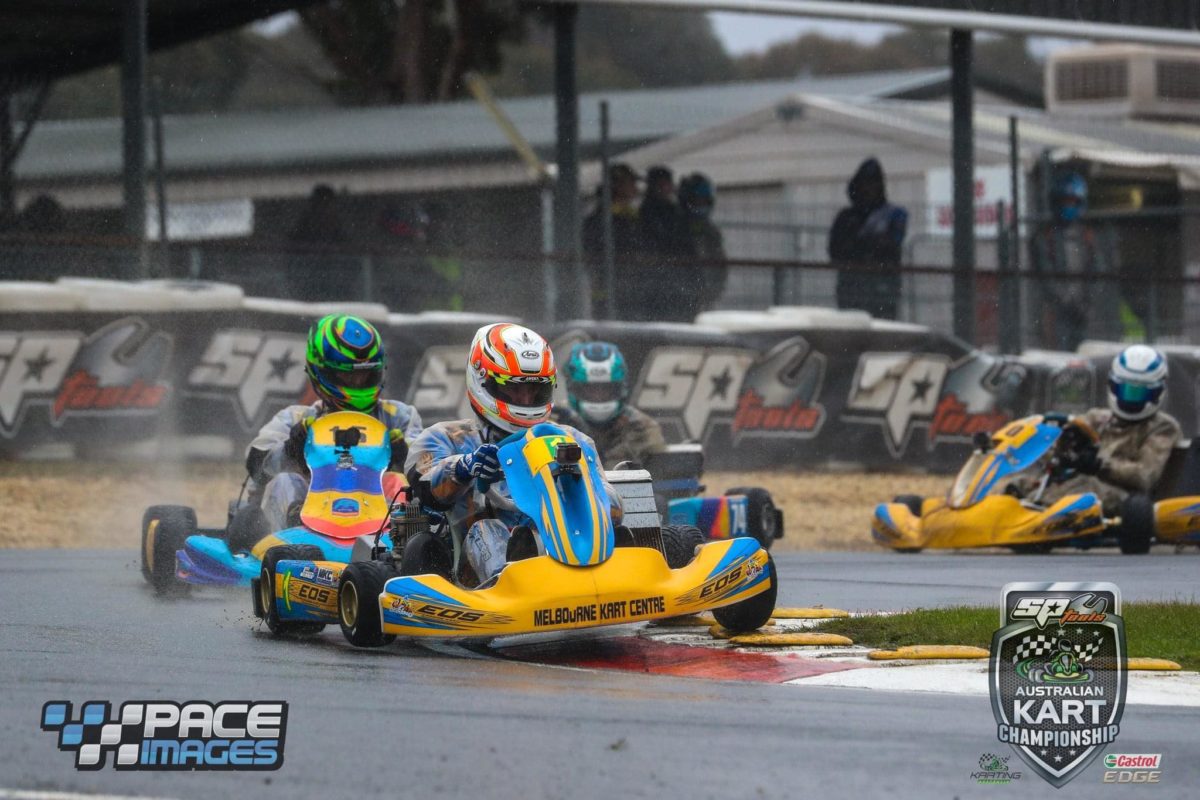 Melbourne Kart Centre returned to the SP Tools Australian Kart Championship over the weekend at the Eastern Lions Kart Club. With a team of fifteen drivers across six different classes, the team was looking to put their best foot forward. With current Australian Kart Championship champion Brad Jenner and team owner and former National champion James Sera leading the team, goals and targets were high.

The X30 class had a three driver attack with current champion Bradley Jenner, Jobe Stewart and Samuel Gibson. Jenner put in a sensational effort in qualifying grabbing the important pole position. Stewart landed himself in the top ten in position seven overall, with Gibson just outside the top thirty in position thirty one. Jenner put in a faultless four heats, taking victory in each race. Stewart and Gibson both had mixed heats but raced hard on the edge of the top ten with Stewart as high as eleventh in heat one and three and Gibson as high as thirteenth in heat two. Jenner put in an epic performance leading from lights to flag in the final taking a clean sweep and maximum points for the weekend. Gibson managed to work has way up inside the top twenty in position nineteen, while an unfortunate DNF bought an end to Stewarts charge.

Blake Purvis was the youngest driver in Melbourne Kart Centre team taking on the oversubscribed Cadet 12 class. In a near fifty kart field Purvis qualified in position twenty two and was looking to move forward across the weekend. Purvis battled on the edge of the top twenty in the opening three heats, before moving forward and breaking his way into the top fifteen with a thirteenth in heat four. In the combined final field Blake started out of position thirty one and was able to charge up nineteen positions and have his best result of the weekend in the final for twelfth spot!

TAG 125 had the single driver Melbourne Kart Centre attack in Aleksander Stefanovich. In a full grid of near forty karts Stefanovich set a time just outside the top twenty in position twenty two. Aleksander moved up in the four heats with two finishes of eighteenth his best result. Stefanovich put in his best result of the weekend in the final making his way up the field and just outside the top fifteen in position sixteen to round out the weekend.

Melbourne Kart Centre pilot Jay Murray was the sole driver in the premier KA2 junior class. Murray struggled with his pace in qualifying setting the thirty ninth fastest time. Murray was able to regroup in the heats coming home with three top fifteen finishes with fifteenth in heat one, eleventh in heat two and thirteenth in heat four. Murray when looking on for a strong result an awesome fightback had an unfortunate DNF ending his weekend prematurely.

KA3 Senior was the biggest class of the weekend for Melbourne Kart Centre with a seven driver attack of James Sera, Taine Venables, Jake Santalucia, Jenson Teleskivi, Josh Lackas, Jack Johnson and Imran Aly. Sera and Venables led the charge both coming home in the top ten in qualifying. Santalucia and Teleskivi both landed inside the top twenty with Aly, Lackas and Johnson all outside the top twenty five. Sera and Venables once again led the way in the heats, with a win and second in heat two and four for Sera and third in heat two for Venables. Santalucia worked his way into the top five in the heats, with Teleskivi working his way into the top ten. Aly, Lackas and Johnson all improved as the weekend went on and gained valuable track experience. The final didn’t go the team’s way with only Santalucia and Teleskivi making the chequered flag. Jenson came home inside the top twenty in position nineteen with Jake not far behind in position twenty four overall.

Team owners James and Sam Sera spoke post weekend of Jenner leading the charge for the team. “It was great to see Bradley Jenner lead the team and get back on the top step of the podium! We had good pace across multiple classes but it was a very tough weekend with shocking weather and wet conditions. We look forward to the next round of the championship in Emerald”. Melbourne Kart Centre will be back for the fourth round of the series at the Emerald Kart Club in July!