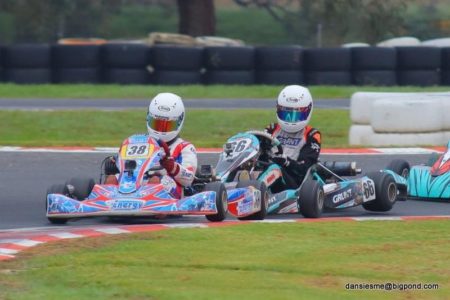 DJM Race Engineering took a team of nine drivers across five classes to the third round of the Golden Power Series at the Albury Wodonga Kart Club. The team has had a busy start to the 2022 season and took out a round victory at the previous round of the series in Bendigo. The DJM Race Engineering team was looking to do much the same at round 3.
Brett Jenkin’s took on the TAG 125 Restricted Heavy division. Jenkins put himself out of position three in qualifying and ran continually in the top three over the weekend. Just when Jenkins didn’t look like he had the pace to take victory he got an excellent start in the final and jumped to the lead. Jenkins was then able to drive up the road and pull away from his rivals and take his second consecutive round victory! Jenkins also left the weekend with the championship lead going into the remaining rounds!
Adam Campbell, Natasha Emmins and Harley Bright were a three driver DJM Race Engineering attack on the KA3 Senior Light class. Campbell led the charge in qualifying, landing himself inside the top ten with Bright and Emmins in position fifteen and eighteen. Bright and Emmins both did a great job in the heats to move up as high as position eleven while Campbell hovered around the edge of the top ten. In a fast pace and tough final, Campbell was able to come home in position thirteen, with Emmins and Bright right behind in position fourteen and fifteen overall.
Zane Bright was the sole DJM Race Engineering driver in the TAG 125 Light class. In a competitive near twenty five driver field, Zane was able to set the fifteenth fastest time in qualifying and was looking to move forward. Bright put in an excellent opening heat and was able to move up to position eleven but after this had a horror weekend of bad luck and not being able to finish another race. Zane will be looking to bounce back at the next round of the Championship.
Bodhi Bright was the final Bright brother to represent DJM Race Engineering, this time in the KA3 Senior Medium category. Bright did an excellent job in qualifying just missing the top five in position six overall. A DNF in heat two hurt Bodhi’s chances but a seventh and eighth in heat one and two turned his weekend around looking towards the final. Bright put in another strong drive in the final to come home just outside the top five in position seven overall!
Nathan Emmins and Toby Dvorak were the final DJM Race Engineering pilots out on circuit in KA3 Junior. Emmins led the charge in qualifying, setting the sixth fastest time with Dvorak just outside the top fifteen in position seventeen. Emmins put in a great second in heat one and was leading heat two until getting ran off the circuit and recovered for position six in heat three. Dvorak chipped away at position and pace throughout the heats and was on the verge of the top ten. Emmins continued his recovery in the final and was able to come home just off the podium in position four. Dvorak continued his progress and was able to come home inside the top ten in the final to round out his weekend.
DJM Race Engineering team manager Dylan McLellan spoke post weekend of the team’s results. “We had an okay weekend with a few things not going our way. Brett did a great job to take victory and Nathan would have been right in the battle for victory if not for heat two. We’ll learn, regroup and come back at the next round bigger and stronger”. DJM Race Engineering will be back at the track this weekend for the third round of the SP Tools Australian Kart Championship.