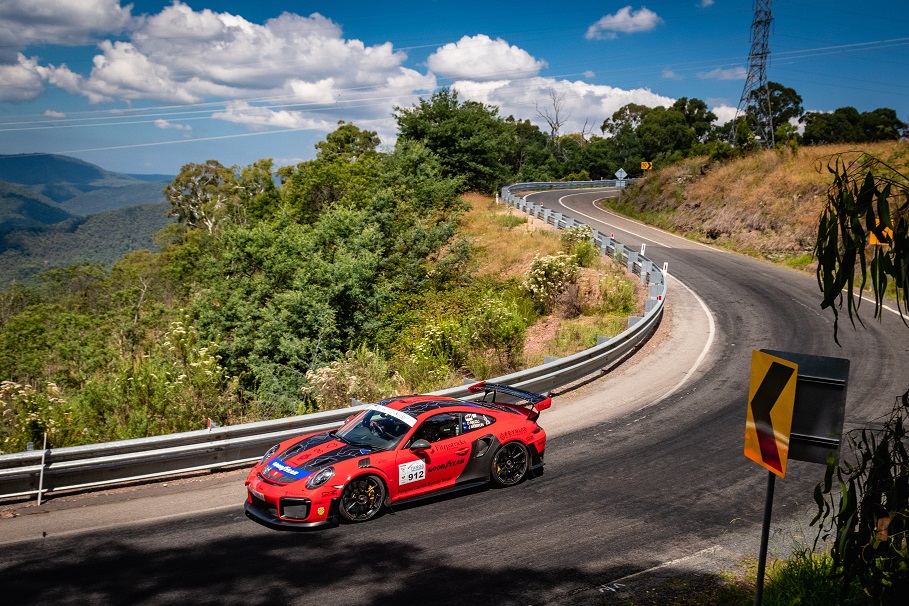 Porsche 911 GT2 RS driver, Jeff Morton, has claimed a dominant victory at Targa High Country in Victoria’s alpine region. With his regular co-driver Daymon Nicoli alongside calling the notes, the Sydney resident broke the shackles on his Targa career in emphatic style.

It was a supreme display of tarmac rallying by Morton who dominated the three-day event, winning by 2m24secs, after increasing his advantage by 43secs on an incident-filled final day.

Leading from the start on Friday, the cancer survivor maintained a controlled pace to stave off all challengers in the 2019 Porsche GT2 RS which he refers to affectionately as ‘Red Thunder’.
“We were here to enjoy this rally and we didn’t expect to be in a position we are in,” Morton said.
“It’s also valuable testing for us ahead of Targa Tasmania (April 26-May 1). There is no bigger test for a tyre than the Jamieson/Eildon stages. This is just a dream result and we are over the moon.”

Morton also claimed the MT Buller GT Outright category ahead of Kennard with Tony Quinn and Kate Catford third in their 2018 Nissan GT-R.

Targa will be back for the 30th anniversary edition of Targa Tasmania from April 26-May 1.

QUOTES:
Jeff Morton/Daymon Nicoli (2019 Porsche GT2 RS): “The main thing for us was the long stage (Jamieson), we were on it and we got about halfway through and thought we had a flat but it turned out we didn’t. We kept going and came across the crash and had to pull over but the good news is no-one was badly injured. I started at Targa High Country in 2016 and only got my racing licence 10 months before the event and we ended up doing TSD in my Lotus Elise and we ended up getting on the podium. I was hooked after that. I had a third in High Country in 2018 behind Jason White and Matt Close in the Lotus Elise and I thought I need to find a car that I could feel I could win in. Going up Mt Buller on the last stage today, was just awesome as we felt really hooked up. To come over that line and have the amazing feeling of winning, I felt like I’m in a dream.”