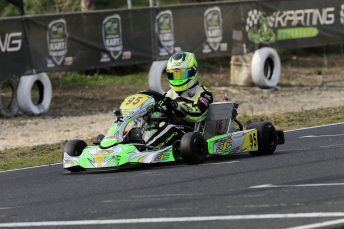 JC Karts driver Aaron Cameron will make the next step in his flourishing career later this year when he plans to take on the World’s best later this year.

The Victorian teenager will compete in the CIK-FIA International KZ2 Super Cup at the Wackersdorf circuit in Germany on September 7-10.

Since moving to the senior ranks at the start of 2016 Cameron has enjoyed a rapid rise to the front of the highly-competitive KZ2 field in the Australian Kart Championship before claiming his maiden round win last September.

In 2017 he has joined the JC Kart team while being mentored by William Yarwood and Jon Targett, the latter of which will accompany him in his international campaign.

Having competed in Europe as a junior competitor, where he qualified 10th fastest at the World Junior Championship, Cameron is excited about returning to international competition.

“Both William and Jon have been amazing influences on me over the past couple of years. The experience that these guys have got in the karting is second to none and I’m very grateful to have them in my corner,” said Cameron.

“Without their support, this opportunity to compete internationally would not be possible and I can’t wait to get over there and fly the Aussie flag high.”

2010 Supercars Champion James Courtney, who had Targett as one of the key influences on his career during his younger years, believes Cameron is one of Australia’s brightest young talents.

“Aaron has shown over the past couple of years that he not only has the raw speed but also the maturity to be able to go a long way in motorsport. His results of late also show that he’s very adaptable,” said Courtney.

“Already this year he’s been at the front of the KZ2 field, then jumped into a Toyota 86 and was fast in that then took out the Formula Ford Round at Winton as a privateer. That’s three very different cars that require three very different driving styles but he’s adapted very well with them all.

“I feel that racing in Germany will take him to another level and put him on a great pathway for the next few years.”