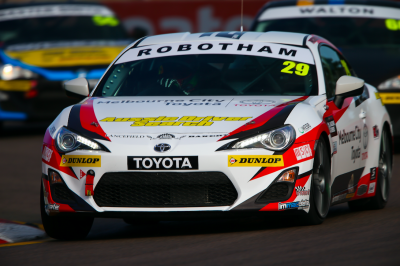 I had a pretty good weekend at Townsville. I came away finishing 11th overall for the round – which I’m pretty happy with.

I was a little nervous going into the round, considering I’d never raced there before, so I didn’t really know what to expect. However, overall I really enjoyed the style and layout of the track – it’s a really cool circuit!

I was happy to have come away with improving after each session. Saturday’s qualifying I had a pretty decent run and managed to put the car 12th on the grid, which is where I finished up for the race too.

Race 2 I managed to go one better and finished 11th and went one better again in Sunday’s final race and placed 10th. Considering I was still learning the track throughout the weekend, I was pleased with where I finished up.

The crew at Ashley Seward Motorsport provided me with a mega car all weekend, we weren’t that far off the top runners in the end – I just needed to get better track position.

We didn’t make too many changes to the car, until the last run and it was interesting to learn how the car took to the track as it gained more grip as the weekend went on.

We had a good clean weekend, we got touched up a little in the last race but overall it was good to come away having had some nice, clean racing.

There’s a bit of a break in between races – I’ll be racing at Sandown in two weeks time in the excel, which will be my last race in the series and then I’ll obviously be back in the (Toyota) 86 for The Bend Motorsport Park, Adelaide.

I’m really looking forward to getting to The Bend, being a new track I obviously haven’t been there before either – but we’re looking to get a test day in, so hopefully I will have a bit more confidence going into the round.

The Bend Motorsport Park will take place in Adelaide, August 24 – 26.

Hope to see you there!
Jay!