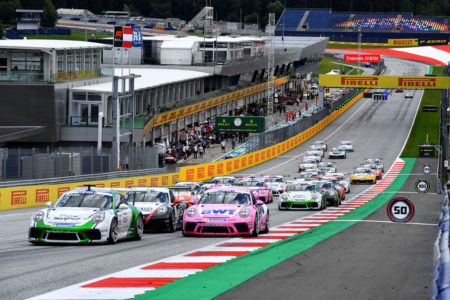 “No one can plan that, everything simply ran perfectly,” said an elated Pereira. With his win, Pereira moves to the top of the points table in the international Supercup, which has represented the pinnacle of Porsche’s one-make cup series since 1993 and is currently contested with 485 hp Porsche 911 GT3 Cup racers.

Porsche Junior, Jaxon Evans (BWT Lechner Racing), the winner of the season-opening round at the same venue, rounded out the top five, moving up three places after a poor qualifying session saw him start the race from eighth.

“It was an extremely difficult start to the season”, Fach explained and added: “But in comparison to the first race a week ago, we’ve made some improvement. Even though results don’t show this at first glance, we’re on the right track.”

Jordan Love delivered the proof with his twelfth in Free Practice, which was a considerable improvement to his start position (18th) in his debut race. The Supercup rookie driver moved forward briefly during the race but fell back to finish 13th, two places behind teammate, Jaap van Lagen (11th).

After two back-to-back races at Spielberg, the Porsche Mobil 1 Supercup now travels to Hungary, where the third round of the season will be held at the Hungaroring near Budapest next weekend.