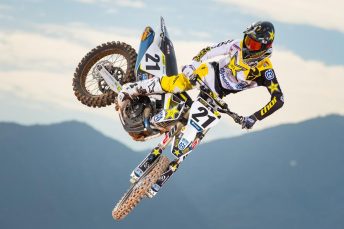 Fresh off an emphatic win at the World Supercross season finale in Las Vegas just a fortnight ago, American superstar and world number four – Jason Anderson, has been announced to compete at the 2017 AUS-X Open Sydney, ensuring a clash of the titans between he and Australian hero, Chad Reed.

The duo will face off against a whole host of A-List riders from around the world, along with Australia’s best domestic supercross stars, duking it out inside Sydney’s Qudos Bank Arena on November 11 & 12.

There certainly isn’t any love lost between Reed and Anderson, with the latter controversially slamming Reed off the track for the win in Vegas. The move subsequently relegated the 35 year-old veteran from Kurri Kurri, NSW to sixth position, whilst Anderson claimed the win.

Reed’s comment post-race of Anderson’s move simply was ‘(I) can’t wait for the tight confines of the AUS-X Open’, suggesting that pyrotechnics will not be the only fireworks inside Qudos Bank Arena come November.

At just 24-years-of age, Anderson has already established himself as a star of supercross, having captured the 2014 AMA 250cc West Coast Supercross Championship and winning his debut 450cc championship race in January last year.

For Anderson, the prospect of heading down under to compete in Sydney’s famed Olympic Park precinct was an opportunity that he couldn’t pass up.

“I’m super psyched to be heading to Australia in November and throwing down at the AUS-X Open!” Anderson said.

“It’s always been a race that I’ve kept a close eye on – the last two years have seen some intense racing, and I’m excited to be adding to the amazing legacy that the event has already created.”

When questioned about competing against rival and hometown hero Reed, Anderson mentioned that things could get interesting.

“To race Chad in his home country will be awesome. He’s a legend around the world and has had an amazing career. I have a huge amount of respect for him.”

“We get along really well off the track, but we’re both competitors, both want to win and will do anything to do so – even if it means a bit of aggressive riding. I actually won’t be racing him again until we line up in Sydney, so who knows what will happen – fans will definitely get their money’s worth!”

Event Co-Founder and Director – Adam Bailey, said the addition of Anderson to the 2017 line up will bring much more to the event than the most intense racing seen on Australian shores.

“Jason represents exactly what the AUS-X Open is about. He has a certain style and swagger to him unlike any athlete in the world – but above all, is incredibly fast and determined to win,” Bailey said.

“We are really excited to see he and our own hero in Chad Reed go head-to-head, along with a whole host of international and domestic stars; who knows what will happen?!”

Whilst the news of Anderson’s signing to compete in Australia for the first time in November is sure to create enormous buzz with AUS-X Open fans, Bailey maintains there’s plenty more to come.

“We really enjoy keeping people guessing but let’s just say we’re certainly not done yet. We’ll ensure we give fans plenty of reasons to travel to Sydney on November 11 and 12. You will not want to miss a minute.”

The securement of Anderson for the AUS-X Open couldn’t have been done without the support of leading manufacturer brand – Husqvarna, and the National Brand Manager for Australia – Jon Hafey, is incredibly excited to see the #21 down under.

“It’s absolutely fantastic that Jason Anderson has chosen to compete in the 2017 AUS-X Open. Jason has long been associated with the Husqvarna brand and having a World Class rider competing in Australia at this event is a mouth-watering concept! Jason is exciting, aggressive and blisteringly fast.

Jason is absolutely one of the top five riders in the world right now which he demonstrated by winning the final World Supercross race in Las Vegas a fortnight ago. We have no doubt that he will provide the SX fans with a thrilling and more than memorable experience,” finished Hafey.

The AUS-X Open has been touted as the largest Supercross, Freestyle Motocross and Action Sports event in the Southern Hemisphere. Featuring the world’s best on two wheels, combined with concert like entertainment values, all within the comfort of one of Australia’s iconic indoor venues.

With each Saturday night selling out within days in both 2015 & 2016, and last year’s Sunday event almost reaching capacity, fans are urged to sign up to the AUS-X Open pre-sale registration to avoid disappointment.

Further announcements regarding athlete line up, revised ticket pricing and much more are expected to follow in the coming days.