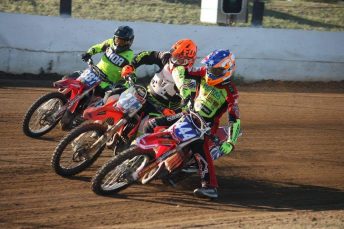 Jarred Brook, hailing from Queensland has sensationally claimed victories in the Pro 450, MX Open and the Pro 250 classes at the 2017 Australian Senior Track Championship. Hosted by the Tamworth Motorcycle Club, the event was a great success and put on a spectacular show for the local spectators from 8-9 December.

The President of the Tamworth Motorcycle Club, Paul Slade was pleased with the success of the Australian Track Championship; “The event delivered plenty of action and really exciting racing. The track was in really good condition and handled the warm sun well. The standout has to be Jarred Brook – who won the final and Nick Morris won the Pro Open. The crowd was very impressive on Saturday night and riders were very happy with the two-day set up,” Slade finished.

World class talent was on display for everyone to see with former champions going up against up and coming new comers. However, it would be Brook to deliver a performance for the ages, taking an impressive haul of medallions for his trophy cabinet.

Brook sharing after the event; “That’s a wrap on the 2017 season, what a way to finish at the 2017 Australian Long Track Championships held at Tamworth on the weekend. Absolutely stoked to come away with winning the Pro 450, MX Open, Pro 250 and coming away with a second place in the Pro Open. Couldn’t have done it without the fantastic support of my team, family and sponsors.”

Harry Maxwell was victorious in the Australian Under 19’s class, to edge out Max Whale and Bailey Spencer. It was an impressive debut for Whale in his first senior Track Championship with an extremely close second place in class.

In the Senior Dirt Track Sidecar class, duo Darren Fien / Adam Bevan took first place Honours ahead of Greg Parsonage/Steven Smith and Trevo Harvey/ Tim Jones. Victors Fien and Bevan were in top form during the course of the event, taking the wins in every round except round three.

For the Australian Pro Open, Queensland hot shot Nick Morris took victory ahead of the in-form rider Brook and the ever impressing Whale.

Over in the Australian Pro Women, Briony Hendrickson was the star of the show with a near perfect ride in all races. Hendrickson finished ahead of Amy Wedd and Bree-anna Etheridge.

Hendrickson saying; “Just got home from the 2017 Australian Track Championships held down in Tamworth. We had a great weekend with some fantastic racing finishing 1, 1, 1, 2, 1 for the overall win in the Pro Open Women’s division. I am stoked to have won all 4 titles this year!”