Jansen angling for podium trifecta at home round

Jansen angling for podium trifecta at home round 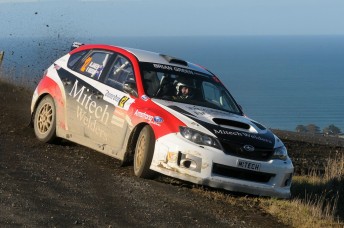 Christchurch’s Matt Jansen will start his home round of the Brian Green Property Group New Zealand Rally Championship – driven by Vinz [NZRC] gunning for a trifecta of podium finishes.

“These back-to-back podiums are great for our confidence and we are really looking forward to continuing our current run,” said Jansen.

“Especially in our own backyard and in front of our friends, supporters and families.”

Plenty of challenges will need to be overcome during this weekend’s Lone Star Rally of Canterbury for this to be achieved, none more so than the introduction of night stages on Saturday which will add a new dimension to an already popular round of the NZRC.

“We don’t do a lot of night rallying nowadays,” Jansen said.

“So Rocky and I, the car and the PMTMotorsport Team will all be faced with performing under somewhat ‘foreign’ conditions.

“For Rocky and I, Saturday will be a very busy day as the timetable for this year’s event is pretty condensed.

“We will be doing recce of the four forestry stages [the pre-rally stage checking when pace notes are created] in the morning, then going out and competing on two of them that same evening.

“With the Ceremonial Start in the afternoon, we won’t have the usual amount of time to check our notes and then it will be quite a bit later in the night before we get the opportunity to complete preparations for Sunday’s stages.”

The Lone Star Rally of Canterbury in association with Joes Garage commences with a Rally Show and Ceremonial Start from the Palms Shopping Mall in Shirley on Saturday afternoon at 4.45pm.

Crews then head to the Okuku Forest, west of Rangiora for two night stages starting at 6pm on demanding forest roads in the foothills.

Sunday’s competition heads as far north as Cheviot for a further six stages. A total of 153km of competition will be covered before the victory celebrations on the Finish Ramp will be held from 4.15pm back at the Palms Shopping Mall.