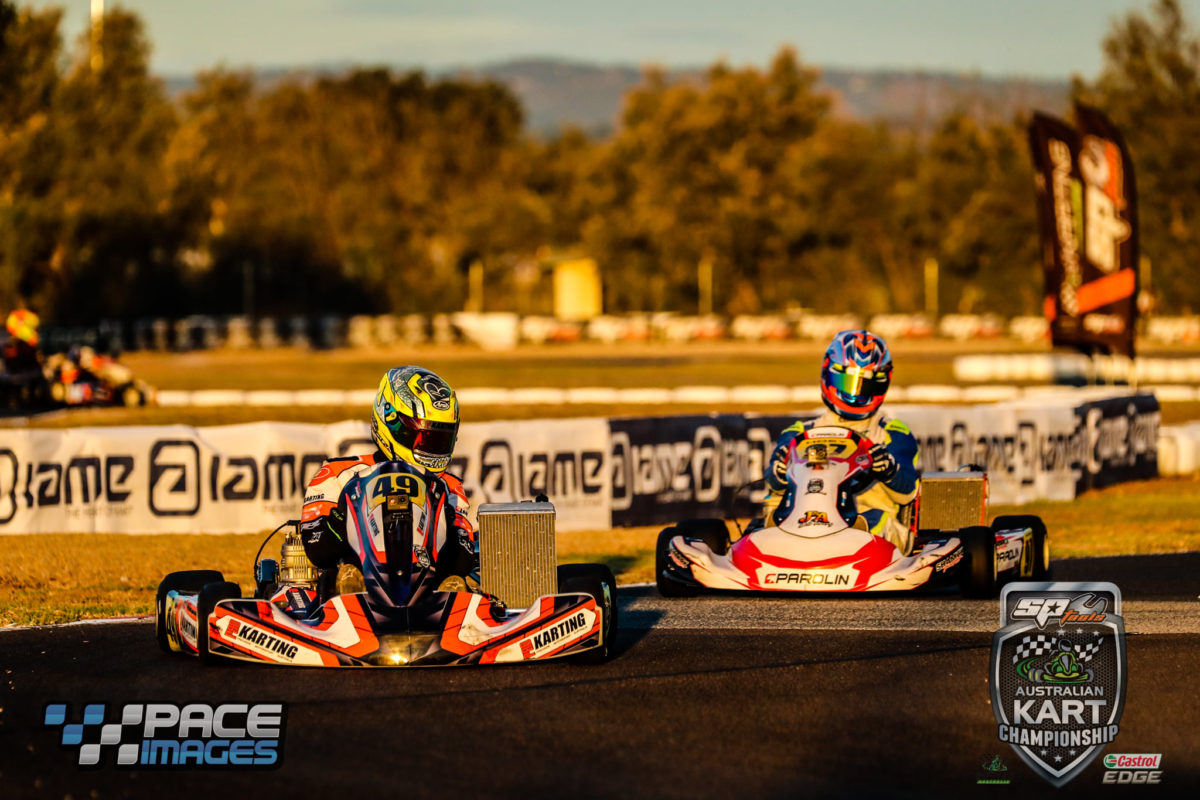 Kristian Janev was back to take on round three of the SP Tools Australian Kart Championship at the Eastern Lions Kart Club. After a strong debut in the X30 class at the previous round of the championship and then at the Victorian Kart Championship, Janev was on the hunt for points and strong finishes. Kristian running out of the Pro Karting camp and once again was looking to start his Friday practice and qualifying in excellent fashion.

Janev used Friday practice to get up to speed for Friday qualifying. The Janev Building sponsored entry put himself immediately in the top ten and in the battle for pole position. Kristian pushed to the edge of the top five and was only tenths of a second off pole position in an intense and hard fought session. Janev set his fastest time which was good enough for sixth position only a tenth and a half of pole position!

A wet and cold Saturday presented itself for Kristian’s opening heat where he’ll be off the third row. The Regency Window backed entry jumped straight up to third place on the opening lap. Janev battled hard and had the pace to stay in the top five. Kristian dropped to position four in the middle stages but was continuing to push on. Janev was able to start his racing weekend on a high crossing the line in position four overall!

Heat two and Kristian was looking to continue his excellent start to the weekend. The Masterpiece Cabinetry sponsored entry was unfortunately involved in an incident on the opening lap, dropping the young driver to the rear of the field. Janev put the head down and tried to make his way back up the field and back into contention. Kristian was able to recover for position twenty nine which was a disappointment after such a strong start to the weekend.

Due to his second heat Janev was out of position twelve and was once again looking to move forward. The Janev Building sponsored entry was able to jump inside the top ten and get himself up as high as ninth overall in a great start to the heat. Kristian was once again in some tough battles and dropped outside the top ten across the race. Janev unfortunately got a post-race drop down penalty which classified him in position fourteen overall.

Janev was now out of position thirteen overall and again got a great start jumping into the top ten. The Regency Window backed entry got up as high as position seven in the early stages. Janev was unfortunately caught up in incidents like heat three which dropped him right down the order when in a challenging position. Janev crossed the line in a disappointing position twenty going into the final race.

The final was a race Janev wanted to race as hard as possible but stay out of trouble like his previous heats. The Masterpiece Cabinetry sponsored entry got a great start and was pushing on the edge of the top ten. Kristian put in some nice moves and was able to make his way into the top ten across the twenty lap final. Janev was able to cross the line in the final in ninth place overall in a great fightback from his heat race dilemmas.

Kristian’s father David spoke post weekend on the difficulties of the weekend. “We had a great start to the weekend and really had the pace to be in the top five. We had some really bad luck in the heat races which hurt our starting position for the final. Kristian drove really well in the final getting back into the top ten”. Janev will be back on circuit at round four of the championship in July at the Emerald Kart Club.