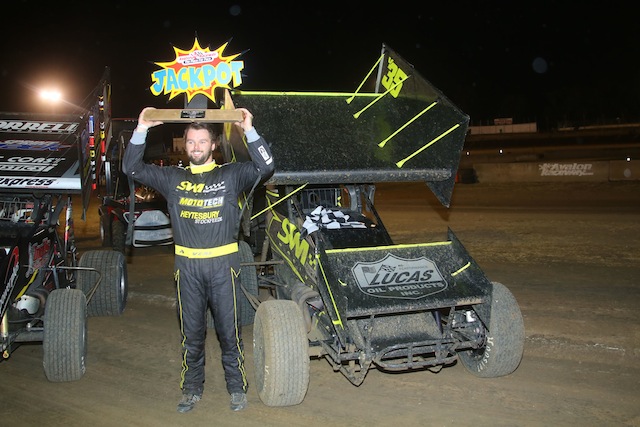 The young racer from Warrnambool has now won five sprintcar feature races back to back in Sydney, Moama and the bull ring at Avalon which is a rare record in these tough and competitive days of winged sprinters.

And don’t think for a moment victory on Saturday night was easy.

The first task was to transfer from near the rear of a qualifying heat, but a racer’s track surface made that easy.

He made it through that with flying colours, set fastest qualifying time which gave him a front row start in the 10 lap Jackpot from where he then checked out to win as he pleased from Australian champion David Murcott and transplanted Tasmanian Shaun Dobson.

Veal’s spectacular start to the season is remeniscient of the form James McFadden displayed a few years ago in the WSS series when he bowled over round victories almost at will.

Saturday night’s success has also given him starting points in the Essendon Ford Sweepstakes at Avalon Raceway that awards a new Ford Fiesta to the season’s most outstanding driver.

At present it’s Jamie Veal by a country mile.