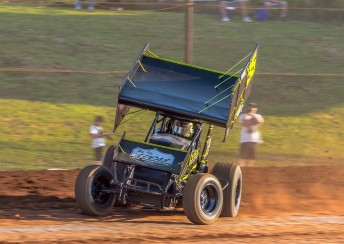 Sprintcar ace Jamie Veal is aiming for his fifth consecutive victory and a $10,000 payday when he contests Avalon Raceway’s invitational Sprintcar Jackpot event on Saturday night.

Undefeated in the 2014/15 season, Veal heads to Avalon on the back of a commanding win last weekend at Moama’s Heartland Raceway, where he lapped almost the entire field.

Veal said the lure of $10,000 is even more of an incentive for a fifth successive victory.

“Five from five would be an incredible feat. The Jackpot is the first big money show of the year and will be the toughest race we’ve faced so far,” Veal said.

“Avalon is a fun track that throws up different conditions every time. It’s flat and narrow, so hopefully the weather is in our favour and its’ a slower track for good elbows-up racing.”

The Sprintcar Jackpot features an unconventional format, which sees the night begin with two 25-lap races. The 32-car field is then whittled down to a 12 over two more elimination races for a 10-lap dash to the $10,000.

Veal knows he will have to be on his game against the high calibre field.

“It’s quite a unique event so it’s really important to be on the pace from start,” Veal said.

“A bad starting position for the opening race can really ruin your night. Guys like James McFadden, David Murcott and Steven Lines are in form, so it will be tight racing.”

The 26-year-old from Warrnambool honed his race craft in America in the off-season with a whirlwind tour of Ohio – where he claimed his first US win – and attributes continuity in the car to his early season surge.

“All of our gear is the same as the end of 2013/14 and we have a really racy package for the SWI Engineering/Lucas Oil Maxim,” Veal said.

“We were strong at the end of last season, so I feel like we picked up where we left off.

“Racing in America definitely helped too because it meant I could get invaluable time behind the wheel over our winter so I was comfortable in the car from the first night.”

The Sprintcar Jackpot takes place on Saturday night at Avalon Raceway with racing from 6pm.