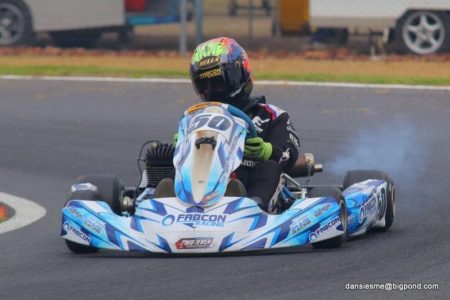 Fabcon Racing continued their preparation for the fourth round of the Victorian Golden Power Series over the weekend. The three-driver team, across three classes, took place in the June race meet of the Eastern Lions Kart Club Championship. The team had Jamie Rowe on track in TAG 125 Light and KA3 Senior Light, Nick Popple in KA3 Senior Light and Isabel Rowe in KA4 Junior Heavy. With sunny weather and a dry track to start qualifying on Sunday, the team were keen to get stuck into racing!

Jamie Rowe took on the TAG 125 Light field and started the days racing in the best possible fashion. Rowe was able to take pole position in a field of nearly ten drivers and had the pace to challenge for victory. Jamie was able to continue his exceptional start by winning both the opening heats and putting himself off position one for the third heat. Rowe was able to show another clean set of heels and take out the third heat putting him on maximum points going into the final. Jamie was able to put in a stellar final performance, taking victory. This meant he took pole position, led every lap of the weekend and took out the round win in fine style!

Rowe was back out on circuit in KA3 Senior Light with team mate Nick Popple joining him. Rowe was able to take another pole position and having him off the best possible spot for the heats, with Popple doing an excellent job to come inside the top ten. Jamie was able to continue his brilliant start by taking out both opening heat wins, with Nic having a few incidents hurting his progress after being as high as sixth position. Rowe had a tough race in the third heat being shuffled down the order and crossing the line in seventh position. Popple was just outside the top ten and looking to move forward in the final. Jamie was able to bounce back and fight up to second position in the final and come home second overall for the day. Popple came through for one of his best results for the day in position nine overall, grabbing important information and set up going into the Golden Power Series in two weeks.

KA4 Junior Heavy had a twenty-two driver field with Fabcon Racing have Isabel Rowe take her place for the team. Rowe did a superb job in qualifying setting the third fastest time and having herself of the second row for the heats. Isabel came away with third place in the opening heat but was able to move into the top two in the second heat, crossing the line in second spot overall. Rowe was in a fight for the podium with a third spot in heat three helping those chances. Isabel put in one of her best drives of the weekend, making her way up to second position and crossing the line there in the final! This put her in third place overall for the weekend bringing home the second podium of the weekend for the team.

Team owner and manager Bryan Rowe spoke post weekend on the results. “It was one of our better weekends at the race track! Jamie did an awesome job in TAG and other then a rough third heat was a chance for victory in KA3 Senior Light. Nick had some bad luck in the heats being run off twice but he never gave up as the racing went on. Isabel isn’t a huge fan of Pucka’s track but she had a great weekend and I think that’ll change after a third place in a large twenty kart field”. Fabcon Racing will be back at the Eastern Lions Kart Club in two weeks for the fourth round of the Golden Power Series.