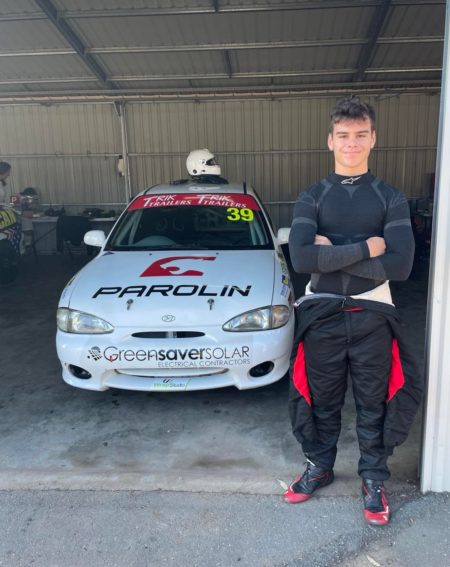 James Lodge returning to the Hyundai Excel racing ranks over the weekend! Lodge took place in the second round of the Victorian State Series at Winton Motor Raceway and was looking to build on his championship. James ran inside the top ten of the championship at the opening round at Sandown and was looking to move further up the grid!

The Parolin Race Karts backed entry had a strong field of twenty-seven drivers to compete against as he hit the track for qualifying. Lodge immediately put himself inside the top ten drivers and showed he had made large in roads in the car. James pushed himself inside the top five and looked one of the leading chances for pole position! In an incredible performance of pace and improvement, Lodge put himself up on the second row of the grid in position three in a great start to his weekend.

The team was pumped with the result and now looked to race one to try and continue this pace on. The Ashley Seward Racing backed entry got a smooth get away and settled in the top five. Lodge was in position three and doing everything he could to put pressure on second position to try and move further up the field. In another super strong performance, James was able to come home in position three overall and grab more valuable points to his championship assault.

With another strong result to round out Saturday, Sunday was pay day for Lodge and the team! Race two was up first with shortened four lap races due to incidents, meaning James had less time and to make his way forward through the field. The Greensaver Solar backed entry once again got a clean get away and was in the battle in the top five group. Lodge was up against fierce competition over the weekend and twice being tagged throughout the weekend. James was able to regroup and press on showing strong pace and excellent determination. Lodge came home in position four overall in race two setting himself up for an exciting final race on Sunday afternoon!

The final race of the weekend was over ten laps and Lodge’s aim was to make his way onto the podium! The Parolin Race Karts backed entry was inside the top five off the start of the race and was pushing hard. James had another great showing making his way into fourth and joining a three way battle for second position! Lodge put in another epic performance coming home just off the podium in position four and moving into the top five in the championship. James father Simon spoke post-race of his son’s weekend.

“James had a reasonably good weekend, qualifying in a strong third position in strong field. He got spun in two out of three races but still manage to start off position four in the third race. It was a tough battle for second and we ended up fourth overall and we’re now fourth in the championship”. Lodge will be a driver to watch in the remaining three rounds of the state series.