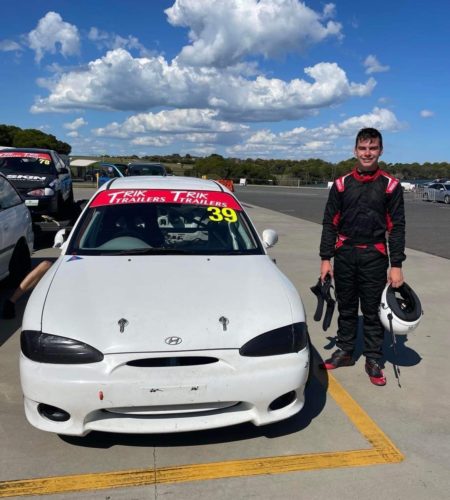 James Lodge is a driver looking to make the next step in the highly competitive Victorian Hyundai Excel series. Lodge made waves last season in Karting Australia ranks, running up the front of the Australian Kart Championship and near all meetings he entered for the Parolin team. Lodge took to the famous Phillip Island Raceway for the first time over the weekend in a large field of twenty drivers looking to kick off his Hera Club Championship.
Lodge hit the track first thing for Saturday morning qualifying and was looking to learn the track as quick as possible to try and start as high up in the field as he could. The Greensaver Solar backed entry headed out on circuit and was quickly up to speed, pushing the most out of his excel. When Lodge was improving times and looking to move inside the top ten when an unfortunate red flag bought to the end of the session and his charge. Due to the red flag James was just outside the top ten in position thirteen but felt he had the pace to push the top ten and that was the aim for the opening race.
Race one come around and Lodge had eight laps to try and move his way through the field. The Parolin Race Karts backed entry had a clean start and pushed to move up the field in the early stages. Lodge had great pace with his lap times up to three seconds faster then his qualifying times while moving up spots onto the edge of the top ten. In a great first race, James made his way into the top ten and continuing to set good pace moving forward up the field. Lodge crossed the line in position nine overall making up four spots from his starting position and improving throughout the race.
Moving forward four spots in race one was a great start for Lodge. The young driver was now looking to continue his progress forward in race two. The Ashley Seward Motorsport sponsored entry got a clean get away and was able to keep himself inside the top ten and was looking to move forward in position. James lap speed was once again improved and he was able to move up to position eight throughout the race. Lodge crossed the line in race two in position eight, making up another spot from his qualifying position. The team were looking to make some final tweaks looking to once again improve in the final race.
Lodge was excited for the final and once again looking to move up position and improve in the car. The Siclids Helmets sponsored entry settled in position eight in the early stages but has pace in the car had improved dramatically. James was able to go up to eight tenths faster from his previous race, getting more comfortable in the car and learning all the time. Lodge came home in an impressive position eight overall in the final on debut learning all the time and moving up five positions from his qualifying spot throughout the day!
James father Simon spoke post-race of their first weekend racing in the Hyundai Excel series. “The weekend went ok, we had never been to Phillip Island before this weekend. We were straight into qualifying which was red flagged putting us down in thirteenth. We raced the next three races and moved up to position eight overall. We’re happy with the day but still have lots to learn for the upcoming season. A big thank you to Ashley Seward Motorsport, Parolin Race Karts, Siclid Helmets and Greensaver Solar”. Lodge will be back on circuit in three weeks’ time for the opening round of the Victorian State Series.