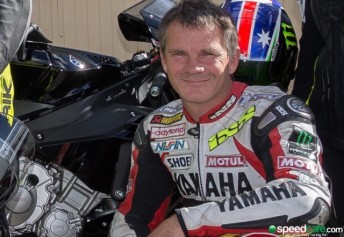 MEDIA RELEASE: The Australian Superbike Championship (ASBK) is excited to announce its 2016 media package, which is set to include a comprehensive range of media platforms.

This year’s coverage of the ASBK will see every round televised free-to-air and on pay TV, plus the introduction of NRGTV’s video production service, lastly incorporating a fresh newly developed media team, which is set to take ASBK to new levels in 2016.

The Australian Superbike Championship is pleased to confirm ASBK free to air coverage on 7mate, and welcome back Fox Sports for a second year running, which will see expert commentator and former World Endurance Champion Steve Martin back calling all of the ASBK action for 2016.

“Television is such a big part of the ASBK and its great to be able to work with championship and head in one clear direction together,” he said.

“To be able to showcase the ASBK to a worldwide audience is something very exciting, and really provides all stakeholders involved in the championship with a great opportunity.

“To be able to cover the series for a second year in a row is exciting, I am looking forward to working hard to show everyone what our Australian athletes are capable of.”

This year’s ASBK coverage will also see the introduction of NRGTV, with a heightened focus on social media video production, and content creation throughout the six rounds across the country.

Aiden Williams head presenter for NRGTV also made comment in light of the recent partnership.

“NRGTV adds an element that hasn’t yet been explored by the ASBK, and we welcome the change and embrace the development of the series,” Williams said.

“The ASBK has such a dedicated team, and to be able showcase the championship is fantastic and something I look forward to this year.

“To be able to focus on quality social media video production, and promotional videos will give the championship a whole new angle, and it will help to promote not only the series but every competitor and team involved.”

The introduction of these changes can already be seen throughout ASBK’s social media platforms and ASBK website, as the series also welcomes a dynamic MA in-house media team for 2016.

Misty Walton, MA Media and Public Relations Manager has vast industry experience and is a well respected member of the motorcycling community – well known for her media work across a number of different disciplines. Pairing with her, will be Walton’s assistant Eliza Berry who adds a fresh new dynamic to the media team bringing with her new energy whilst completing her degree in Media and Public Relations.

Together the pair will manage media for MA’s multiple National Championships including the ASBK, using their knowledge and experience to create higher standards for MA communications and National event coverage.

David Cottee, CEO of Motorcycling Australia was excited to make comment about the recent developments to the ASBK series, summing up exactly what these changes mean for 2016.

“We are thrilled to offer this media package to our sponsors, teams, and athletes to promote the sport to the largest audience possible. Our aim with the television broadcast is to showcase the sport’s high speed action and to build on creating a bigger and better national championship throughout 2016,” he said.

“To see the development of the series over last year is just incredible. We are continually developing and listening to what our stakeholders, ambassadors and competitors want and trying to move in a direction where we can continue to have a National Championship of the highest quality.

“We are proud to offer this year’s media package to competitors and teams. It is wonderful to be able to build on last year’s success to deliver fresh, exciting, new camera angles, interviews, vision and capture how hard our Australian talent works to be able to claim the ASBK title.”

Further announcements on broadcast times will be released shortly. For more information on the 2016 ASBK season head to www.asbk.com.au or you can check out the ASBK Facebook page here.