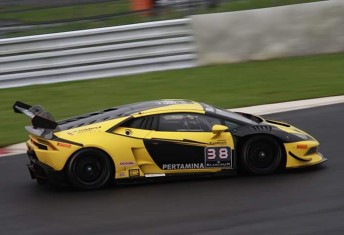 Australian driver Jake Parsons impressed on his maiden outing in the Lamborghini Super Trofeo Asia series at Fuji International Speedway over the weekend.

The weather affected meeting was only his second GT event and his debut on the fast 10-turn, 4.563km Japanese circuit, but, straight out of the box, the 21-year-old showed strong pace in both the wet and dry sessions.

Partnered by fellow Australian Aidan Wright, who he competed against in go-karts back in 2010, Parsons qualified in 5th position for race oneon Saturday. Taking the opening stint, the 2014 AsiaCup champion made his way up to 3rd before completing his first driver change pit stop, with his co-driver bringing the car home in a solid 6th place.

Wright qualified the car in 12th for Sunday’s wet race, moving through to 8th before handing the yellow and black liveried #38 Lamborghini over to Parsons. Overcoming some of Fuji’s typically torrential rain, Parsons drove a clever race to claim 5th and round off an impressive first foray into the series.

“It’s been a really successful and fun weekend. Big thanks to Formula Masters for this great opportunity,” said the young Aussie, who won the drive as part of finishing runner-up in the super competitive 2015 Formula Master China Series.

“I gained valuable experience for the future this week and feel very confident in GT racing now. It was an awesome way to cap off the season, and the future is looking very exciting!”

Parsons last weekend wrapped up his rookie season in US open wheel racing, finishing sixth in the Pro Mazda Championship, with two podiums, the first coming on the iconic Indianapolis Motor Speedway road course. Pro Mazda is part of the prestigious Mazda Road to Indy ladder system.
For more information about Jake and how you can be part of his journey, please contact us at: [email protected]