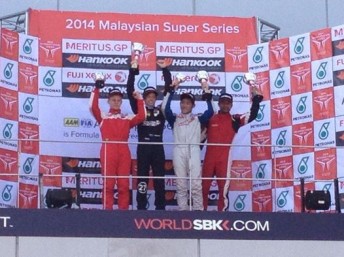 Jake Parsons has taken a dominant victory in the opening round of the Asia Cup series at the Sepang Grand Prix circuit of Malaysia.

The weekend was run over four races with Parsons winning all four leading from the start to finish.

The podium was filled by three other drivers, Michael Waldherr (Germany) Plu Komarakui (Singapore) and Daniel Woodroof Malaysia)
.
Jake led every single lap of all the four races.

Not only was he laying down some very fast lap times but his consistency is what really made him stand above the rest.

“It was great to be involved in such a professional and international series.,” Parsons said.

“After watching Grand Prix races in the past at this track it was great to be able to race on the Sepang circuit.”

“To win my first international FIA event was great. But to win every race and lead from start to finish was the perfect way to start our championship campaign.

“I’m absolutely ecstatic and looking forward to getting back for round 2.”