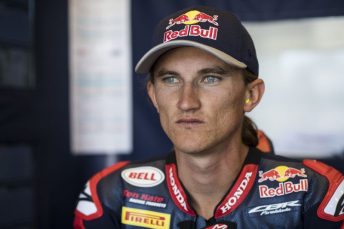 American rider Jake Gagne will race alongside Leon Camier in the 2018 FIM Superbike World Championship for the Red Bull Honda World Superbike Team. The 24-year-old from San Diego, California, will reunite with the squad to take on his maiden full season in the series on board the Honda CBR1000RR Fireblade SP2.

Gagne joined the team for the first time last July, when he made his World Superbike debut at Laguna Seca. After a strong showing in front of his home crowd, he was recruited by Honda and the team for two more rounds, firstly at Magny-Cours and then at the Losail International Circuit for the season finale. Jake constantly improved his performance and feeling with the WorldSBK-spec Fireblade machine as he claimed best results of twelfth on three separate occasions.

It’s really a dream come true to have the chance to contest a full World Superbike season with the Red Bull Honda World Superbike Team. I cannot thank Red Bull, Honda and Ten Kate enough for the opportunity to race the Honda CBR1000RR Fireblade SP2 over three rounds this year. I have learned so much from them and I got to know them quite well, so I’m looking forward to getting going again. 2018 will be an exciting year for me, with a lot of travelling and racing on some of the best race tracks in the world. I want to thank again everyone involved for this incredible opportunity, and I feel I’m ready for the challenge ahead!

We are delighted to have Jake on board for the 2018 season. He picked up the challenge this year and jumped on our Fireblade without prior testing and did well at Laguna Seca, and later showed his talent at tracks he had never raced before. He is young, gifted and a great guy, so he’s the right choice for the team to ride alongside Leon. We look forward to seeing him on track very soon and we’re sure American fans will be happy to cheer him on.