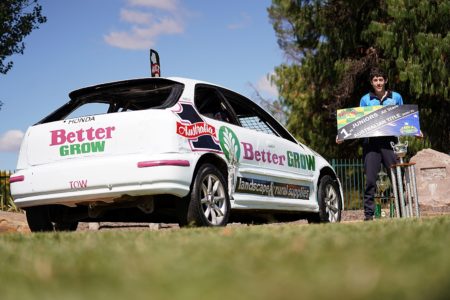 Like any young aspiring speedway racer, one of their ultimate goals is to claim an Australian Title, and that’s exactly what teenager Jaiden Healey recently achieved at Gilgandra Speedway after he won the Australian RSA Junior Sedan Title.

In what was only his second ever Australian RSA Junior Sedan Title attempt, the talented 15-year-old from Portland in NSW couldn’t have asked for a better way to claim Australian Title glory.

Healey was the form driver throughout the Australian Title qualifying events after he claimed three from three wins in his heat races. By virtue of these qualifying performances, he earned the right to start the Australian Title deciding feature race from pole position. In the feature race, Healey managed to withstand the pressure of numerous stoppages throughout the 25-lap event and from various competitors to greet the chequered flag as the winner.

To say that Healey, aboard his # 9 Bettergrow Landscape & Rural Supplies / Portland Automotive supported Honda Civic, was rapt about his Australian Title win would be quite the understatement.

“I had the perfect night during the Australian Title at Gilgandra Speedway, and none of this would’ve been possible without the support of my team and all of our sponsors, which includes Neil Schembri and Andrew Hogarth from Bettergrow Landscape & Rural Supplies, and this win is as much theirs as it is mine.”

For Healey, this is currently his final season in RSA Junior Sedans, and with the Australian Title win now in the bag, he is hungry for more success, which includes competing in the NSW Title at Dubbo’s Morris Park Speedway on the Saturday night of May 29 and then the Queensland Title at Brisbane’s Archerfield Speedway on the Saturday night of June 5.

“There are still a few major race meetings left on the calendar this season, so I’m looking forward to trying to finish my time in Junior Sedans on a high note,” he enthused.

When it comes to the 2021-22 season upon his graduation from RSA Junior Sedans, Healey, who recently sold off his Junior Formula 500 due to physically outgrowing the car, is going to making his debut in senior speedway competition via the hotly-contested SSA Production Sedan class.

To find out more about Healey and his team, LIKE them on Facebook by searching Jman Racing Team.